SXSW Music – is a massive week-long music festival spread across the heart of downtown Austin, Texas, where music fans, musicians and industry heads come together from all over the world to experience music in all shapes and forms. You can not turn around a single corner of downtown Austin without running into music. There are hordes of people everywhere continually rushing from one venue to another hoping to catch their favorite band or artist. Even on the actual streets of downtown Austin, where there is little room move because of the sheer volume of people, you can find musicians walking or at times riding a petty cab and performing their craft. Truly, there is something interesting to experience around every corner! 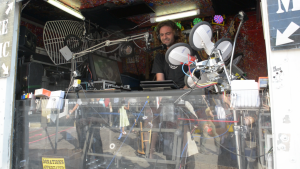 This man was driving down the streets of Austin performing his craft out of a truck, amazing!

As this was our second year in attendance of South By, we had a learned our lessons from years past and stuck to our shooting schedule. There is far too much stuff going on to experience it all… Even if you had a team of 20 people it would be tough to cover it all. Luckily, many of the larger acts perform multiple times during the week, so catching your favorite artist isn’t out of the question. However, there are a few lottery based acts that few people got to experience. These included, Green Day, Justin Timberlake and Prince! Unfortunately, these shows were so tough to get into that even press had a hard time getting in to cover these shows (boo..) However, we were luckily enough to catch a surprise/secret appearance by Wyclef Jean at the Source’s & 2DopeBoyz showcase at Club 119. Wyclef performance was amazing! Wyclef was incredibly passionate about giving every single person in the venue a small piece of him. Wyclef performed old tracks from his Fugees days and even showcased his newest track “911” which included him singing and playing the guitar. The only downside of his performance was the fact that Wyclef really took over the venue, literally, unfortunately eating away time from some of the other headliners at venue and the rumored surprise appearance of Kendrick Lamar, in the fairly small and intimate venue. Personally, I think it was worth it! Check performance video below (Courtesy of Gowherehiphop.com) 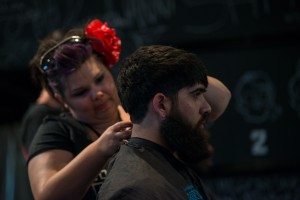 Getting a lineup at the Fader Fort barbershop!

Other highlights from the week included catching Action Bronson, Kendrick Lamar and Trinidad Jame$ twice each! All three have a very distinct live performance and neither of them disappointed. The Fader Fort and Viceland experiences are unique in their own right. Both venues had massive outdoor/indoor stages. To keep people entertained and happy the Fader Fort had many different sponsor booths along the venue which offered demos of their merchandise, free drinks and even hairs cuts! Both Viceland and the Fader Fort had some of the biggest and baddest performers for latter few days of the festival. Including, Future, Trinidad Jame$, IamSU, Macklemore & Ryan Lewis, DJ Bauuer, Kendrick Lamar, P. Diddy and many many more.

Make sure to check out the photo slideshow below to see some of great acts we covered in Austin: 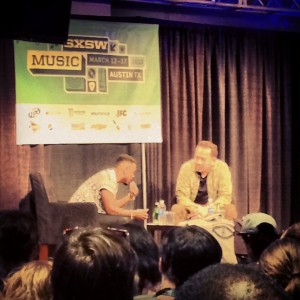 Kendrick Lamar speaking at one of the Panels at the Austin Convention Center.

SXSW, isn’t all about just going to venues and experience new music. A big part of the festival is actually targeted at musicians as creative professionals. In reality SXSW is just as big for musicians from a educational/networking stand point as it is from a performing stand point. Yes, if you happen to perform in-front of the right person, you just might get “discovered” but realistically hundreds of acts perform every single day at SXSW, many performing multiple times each day and still many go unnoticed. Hence, some artists try and diversify their experience by attending some of the educational opportunities SXSW offers. These include panels, mentor sessions and even demo listening session! All of these are organized by SXSW and provide an abundance of information that many artist should know, but unfortunately many don’t know about these opportunities…

Overall, our experience at the 2013 SXSW music festival was nothing less of incredible. However, by the end of the week our team was completely wiped out; our hearing was deafened, our throats and heads were throbbing, our leg muscles were terribly sore but as we rolled into our taxi for our ride to the Austin airport we were all smiles. SXSW 2013 was another successful year full of memorable performances, new emerging acts and many, many new leads to follow.

Levert Has Written 40 Articles For Us!