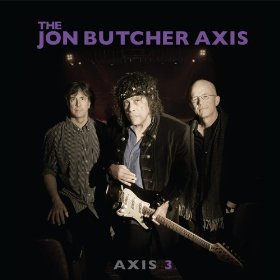 When you think of a guitar slinging front man “rocking out” with a Fender Stratocaster, you typically think of someone like Jimi Hendrix or Stevie Ray Vaughn. One other name also comes to mind—Jon Butcher.

Axis 3 is a great package that includes a variety of Butcher classics both old and new; kicking off with the lively “Ocean in Motion,” followed by familiar greats, “Holy War,” “Wishes,” and an enjoyable, comparable remake of the Jimi Hendrix classic, “Axis: Bold as Love.”

There is no question that Butcher’s abilities to deliver as a top-notch recording artist/performer have not lost any steps. Axis 3 is an electric vibration; Butcher’s robust vocals and silky, vibrant guitars are glued together by drummer Muzz, and bassist Chris Martin’s solid performances.

The virtual “side two” includes new songs “Sentinel,” a ‘Jeff Beck-ish’ instrumental; groovy, hypnotic “Dog Days,” and “Old Atlanta,” a melancholy country ditty that takes you back to early American folklore. The surprising twist is a pleasant finale of Butcher’s smoky/jazzy and intimate remake of the classic “Somewhere over the Rainbow.”

One might not expect to find Butcher on the other side of the curtain, but he is a definite candidate to pull the strings—all six of them, that is—with or without electricity and an amplifier. Axis 3 commands your attention as you find yourself reaching for the knob to turn up the volume. A must have, and highly delectable treat for any music lover.

TheMood Has Written 11 Articles For Us!

Currently Arthur is a freelance music critic and writer; he has written a book, “Tribute: The Dark Side of The Mood” which exposes the biggest act of music piracy in history, exposing insider information about the theft of Pink Floyd committed by a Kurzweil employee/professor from Berklee College of Music.