Down Under We Interview ; The Vernons 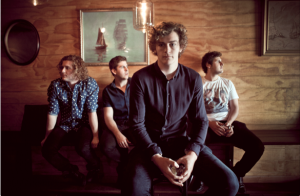 Australian made The Vernons has come to rock our ears with their new upcoming debut EP in September . Fueled by inspirations from  the early rock and blues era , they bring along a modern twist . Their new hit single “Standing in Line ” has  people begging for more . But , be pleased to hear they are touring internationally this fall . Interviewing The Vernons bassist Hugh Trait ,we.find out more !

We’re all wondering, how did the band start?

We all met at different times over the years, but in terms of the band’s early days of formation, this occurred at home on the Gold Coast. Elliot (drums) and James (lead guitar) first formed a covers band and once Jonny (lead singer) returned from his GAP year in England in 2011, he introduced his own material to the guys. I entered the band later on in the piece, and the rest is history!

The band’s name, the Vernons, where did it come from?

“The Vernons” derives from a certain gentleman’s surname whom James and Jonny worked for in Hertfordshire, England during their respective GAP years. Naming the band after him was inspired through his somewhat unfortunate dislike for music!

Who has been your music influences growing up?

All of us had very different musical influences through our childhood. We listened to bands such as The Rolling Stones, The Beatles, Ray Charles, Led Zeppelin, Lou Reed, Buddy Guy and plenty more throughout that Rock n Roll/Soul/Early Pop era, to bands like The Red Hot Chili Peppers and Coldplay.

What sets you apart from other artists?

Living in a city that boasts pristine beaches, large nightclubs and a large tourism industry, Blues Rock-n-Roll isn’t the first thing that is associated with the Gold Coast. We have a certain music style that would usually be associated with bygone eras that we hope to see be reincarnated throughout popular music.

Where are ya’ll going to tour this fall?

Throughout this month we are heading off on an Australian East Coast tour, something which we are extremely excited to embark on. We hopefully will be visiting the States towards October for CMJ in New York, if all things go to plan!!

Any strange experiences you thought you would never encounter since being in a band?

Playing at an event marketed as ‘A Day At The Races’- arriving to find there are no horses racing, but lawn mowers with motorbike engines fuelled by 2-stroke engine oil racing around an obstacle course.. Our soundcheck was interrupted by flaming rogue lawn mowers hurtling uncontrollably towards an rather concerned onlooking crowd. Not your typical gig!

What’s the story behind your EP?

Volume I is our first EP, but in just 4 songs it basically tells the story of our lives over the past 2 years. Whether they were written just to have fun and party, or to remember meeting a pretty girl at one of our shows, or something much more deep and meaningful, each song is directly related to our journey, working together every day on the road. Obviously, there are good times and there are bad times, and this EP basically captures all those emotions, and tells the tale of a hard working bunch of rock ‘n’ rollers.

Who writes the lyrics? What inspires them?

Jonny (the lead singer) and James (lead guitarist) write the crux of the lyrics, whom are inspired by our somewhat fast-paced everyday lives, heavily along with the early 50s/60s/70s blues rock that they most thoroughly enjoy listening to.

Name the first moment where you knew you wanted to play music.

Personally the first moment from memory would date back to primary school years learning to play the guitar, however if I were to gauge off home videos I think my family would suggest as soon as I learnt how to control my father’s Denon CD system… we had very tolerant neighbours to say the least.

Which artists would you like to collaborate with? Why?

We would love to collaborate with other bands such as The Black Keys, or artists such as Jack White or Gary Clark Jr.

Do you think U.S music fans will dig your music?

We most definitely hope so! We believe the sound of our debut EP has that US-feel to it, so we are optimistic in regards to how it will receive.

Lastly, what are your future goals after the tour?

To continue having as much fun as we are having at this point in time! Once we finish up the tour we will most likely head back into the studio and begin working on some new material. Cannot wait!!

Did you know indiesoulchild has a website? Go see what you're missing…
Blame it on: Alyssa Ollivierre on August 16, 2013.