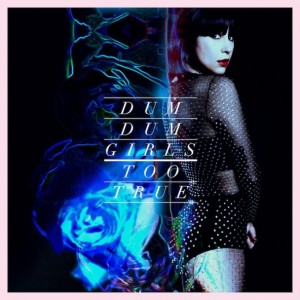 To say Dum Dum Girls, aka Dee Dee Penny aka Kristin Welchez, have matured since the 2010 debut, I Will Be, might insinuate there was a bit of growing up to be done. Not true. I Will Be was a wonderful collection of catchy, fuzzy guitar riffs and 1960s girl-group sensibilities. The album found its way onto many end of the year best of lists beside other stoner debut favorites like Best Coast and Tame Impala.

2011 saw the release of Dum Dum Girls’ second LP, Only in Dreams; a collection of songs juxtaposing sun streaked guitars and reflections of Dee Dee’s mother’s recent passing. The lo-fi fizzy bedroom-ness of I Will Be had been replaced with a more pronounced studio sound. The album also contained standout track, “Coming Down”; a swirling six and half minute showcase of swaying instrumentation and breathtaking vocals that would fit quite comfortably on the shelf beside Mazzy Star. On her third full length outing, Dee Dee continues to develop a sound, touched upon with Only in Dreams, that moves her away from hot sands and beach blankets into more of a dark bedroom setting.

Too True (Sub Pop, 2014) opens with “Cult of Love”; a song that merges beach echoes of earlier songs with gothic overtones; thus, smoothly transitioning the listener from her previous records into new territory. Lyrically, the song sets the mood for what is to come. Dee Dee sings, “You know all my secrets / You know all my lies / I know all your anger / I know all your alibis / I belong (we belong) / To the cult of love,” which serves as a warning that all masks, clothes, and insecurities are to be left at the door prior to continuing. Before giving us a chance to decide if we wish to embark on this bare bones journey across human emotions, Dee Dee croons, “Won’t you join too?” A lyric much less a question than a sirenic trap which pulls the listener headfirst into the rest of the album.

As the record progresses, the listener is lured towards darker waters. “Evil Blooms” observes the harshness of life and ends with the question, “Why be good? / Be beautiful and sad.” “Rimbaud Eyes” provides heavy guitars and clever, watery violent nods to the French poet’s masterpiece, “The Drunken Boat.” “Little Minx” utilizes reverb and explosive guitars to stomp its way through two and a half minutes, while “Lost Boys and Girls Club” re-invokes the swaying guitars first heard in “Coming Down.” “Trouble is My Name” pulls the album to a close but not without first asking one last question: “Trouble is my name / Is it your name, too?” The question posed as the album ends is ironic in the sense that Dee Dee has spent the last 30 minutes seducing us with the undressing of her emotions. Wide-eyed and drooling foolishly, the only thing left for the listener to do is nod mutely and press repeat.

Whereas, questions and confessions permeate the album, insights and new hopes have their place as well. “Under These Hands” observes, “Under these hands / I hold my heart / Under these hands / Hides new start.” Throughout the dark and gloom of the album, there are rays of enlightenment, such as this one, suggesting everything is going to be just fine. Sometimes, however, you just need a moment to soak in the darkness and the sadness and feel good about it.

Trouble and sadness may be the fabrics from which these songs were constructed, but there is no denying the beauty that spreads like a thin veil across these soundscapes. The songs float their way out of the speakers and fill the surrounding space like hazy clouds ensnaring the listener in a post-punk dream world. Dreamy guitar distortions, percussion, and echoic vocals layer the sad lyrics giving the album a sound that would fit at home on mid-1980s era 4AD records. Too True toggles between ethereal and punk, gothic and 80s dance party, and provides a strong and welcomed addition to the Dum Dum Girls catalog.

Watch the video for “Too True To Be Good” below.

tferrell Has Written 39 Articles For Us!

Did you know tferrell has a website? Go see what you're missing…
Blame it on: tferrell on March 12, 2014.