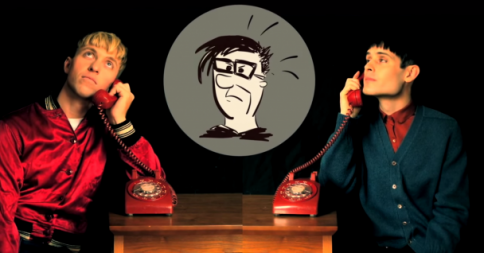 In anticipation of their show at 9:30 Club tomorrow night, The Drums frontman Johnny Pierce was kind enough to give us a peek behind the curtain of their music and answer a few questions.

When we came off the Portamento tour 3 years ago, we weren’t sure what we were going to do. We had lost the team around us- many of them we considered family. It was a difficult and lonely time, but then like a shooting star touching the earth, we had a huge idea – I called Jacob and said “Listen, let’s stop avoiding the next record and let’s just make sure this is our magnum opus! Let’s do everything we have ever wanted to do musically and just nail it.” and from then on we started writing this album. We wanted it to be more “musical” and i bit more “orchestral” – but with synthesizers.

To answer the second part of your question, no I don’t think there is anything unintentional in the whole album. We essential took 3 years to make this record and every little part was labored over and made to be perfect in our eyes. Of course people will take from it what they want, but for us, it is just what it is- nothing less or more.

What surprised you most about when you went back to a lineup of just the founding duo?

The most surprising thing was how long it took for us to realize that this was indeed a strength- not a weakness! We had to remind ourselves that we started this band together and with the exception of Portamento- no one ever played a note or wrote anything on any of our records except for us. Maybe we are difficult people, but we like difficult people. How else could the world stay interesting?

When I say we “labored” over these songs, I do not mean that they were hard to make, I just mean they took a lot of time and thoughtfulness. We were happy to finally be able to work this way- it had never been like this before. We were always recording on a whim in hotel rooms or restaurant bathrooms- no joke- and now we had no one looking and we kept it a secret and just worked away together in a cabin. Of course, now it’s hard to even remember what songs came together quickly, and what songs took a bit more time… life is so dreamy sometimes.

What were the non-musical influences for Encyclopedia?

I appreciate this question because you must have realized that visuals is where our inspiration lies. I never understood the idea of someone making an album and listening to a bunch of different bands or just one band while making it. We always turn everything off and look to movies, videos, and nature to inspire us. It’s the only way to come back with something fresh. It’s too easy to color in someone else’s lines! Be warned, new bands!

How did the title and theme of encyclopedias come about? Did it emerge before, during or after recording?

After we had recorded the album about half way, we started seeing each song as it’s own story, it’s own message, and with it’s own purpose. These songs were more informational than the breezier stuff we had done in the past and were actually describing a new place we had found with new understandings in our music but also ideologies. And Encyclopedia is always being updated with new information and old things are being taken away once they are proven false- much like our ex band members. All for the greater good- all for meaning full songs and a career that hopefully makes a small dent in someones life.