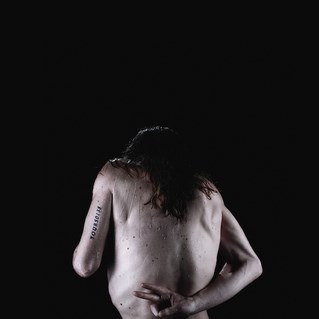 As a music journalist, a welcome benefit to the mysteriousness cloaking the Swedish duo JJ is that due to the lack of obvious narratives to frame the act with, you’re forced to focus on the music. With the release of their third album, V, more is known about JJ, but there’s still not enough background to keep their songs from soaking up allthe spotlight in the foreground.

V begins with an instrumental amalgam of a Malik soundtrack and a vaguely chiropractic, self-hypnotic new age soundscape; a tactic that inserts the listener into an abstract head space. This heady thoughtfulness provides a proper segue into “Dynasti” whose synth floes precariously prop up vocalist Elin Kastlander’s hauntingly gorgeous, and thoroughly millennial, sentiment of “I want to be with you when we lose control.” This is followed by the self-referencing “Dean & Me”, which also shouts out Lesley Gore’s classic, “It’s My Party”, with the interpolation of “it’s my party and I cry if I want to”. Coming from Kastlander’s mouth this line has less of a benign brattiness and a more of a potentially stomach-pumping feel. Single “All White Everything” similarly takes something naïve and shades it in an eerie maturity. Several of its chorus melodies switch from a schoolyard, nursery rhyme jaunt to a southern rap, vaguely chanted cadence to communicate a paean to purity in the 21st century. This is followed by “When I Need You” which marvels at the party trick of how “these drinks keep coming by”, the downbeat sequel to “From Africa to Málaga”; “Fågelsången”, as well as the biggest flex of JJ’s new orchestral muscle; “Full”. The one-two punch of “Inner Light” and “Hold Me” offer some welcome textural variance as both put pitch-shifting pyrotechnics and lighter acoustic fare on the same bookshelf.  Unlike most of the rest of V, the correspondingly alphabetic “I” features JJ keeping a tighter perimeter by not building and building on the sonic pyre. The album begins its descent with the hymnal “Be Here Now” and touches down on “All Ways, Always”. The latter, which sounds like Kastlander got bored halfway through a cover of “Glycerine” and started melodically riffing, could also be hinting at a more guitar-angled sound for the duo in the future.

One of JJ’s biggest strengths is their ability to alternate between moments of voice memo intimacy and cliff top grandiosity. V carries on this baton on V with a slate of songs that are a hair less immediate than past release and need a few rounds of listens to properly simmer. Some patience will reward with insights into the mind of that one girl at the party who seems to be having the time of her life while also shaking her head at how she’s got there.