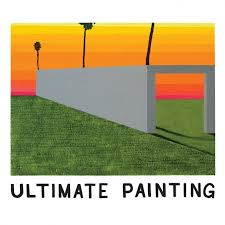 One of my friends in New York is a music journalist who just endured the downpour of bands that it is the CMJ Music Marathon. Out of that new artist ocean, the act he said stood out most was Ultimate Painting. The British outfit, who released their self-titled debut just last week, are primed to become on indie’s rookies of the year.

In a matryoshka move, Ultimate Painting begin said self-titled debut with the eponymously named song, “Ultimate Painting”. I’m not sure which form was the chicken and egg in this situation, but the song, which sounds like Foxygen straightening their tie, is the perfect appetizer for the various ratios of late 60s rock to 90s indie that fill out the rest of the disc. While listening to the next track, “Can’t You See?”, you occasionally feel like you’re listening in on Nirvana’s first practice session. The third song, “Central Park Blues” brings to mind the ramshackle poetic rock of Courtney Barnett while the following tune, “Riverside”, feels like a modern cover of an obscure Animals b-side. Their single “Ten Street” finds the group rehearsing their roles as Lou Reed’s understudies and is buffered by “Rolling in the Deep End”, another song name of Ultimate Painting’s creation that cracked me up. The backend of the record, besides the Kinks-y “She’s a Bomb”, which is also one of the album’s strongest songs, comes off as tracks lost from classic 90s indie bands. There’s some Built to Spill spilled on “Three Piers”, the Guided by Voices guided “Jane”, and “Winter in Your Heart”, which builds on the groundwork laid by Pavement.

Ultimate Painting pull off the nifty maneuver of taking en vogue genres – the decade styles mentioned above – and fishing out chord progressions and melodic angles that are underexplored. The result is a record that sounds more sincere than many past-glancing efforts. My friend’s CMJ evaluation made more and more sense to me as Ultimate Painting manage to standout by using a paper map to navigate to their stylistic destination while other, seemingly similar bands all seem to be using the same GPS apps to chart their course to that musical zip code.