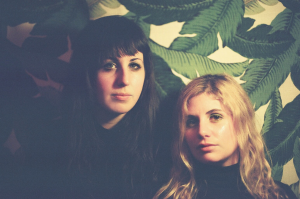 Though it’s become a cliché and punch line, there really is great art coming out of Brooklyn. Exhibit A is the borough’s duo Sharkmuffin. Tarra Thiessen and Natalie Kirch create noise punk with melody, psychedelic garage rock with emotional ballast, power pop with friction. The twosome are dropping into DC for a house show Monday, July 20th at Above the Bayou in Georgetown. Soon after their debut full-length, Chartreuse, will be coming out on Aug 7th. They’ve graciously given us a taste of their new material with the release of the chugging “Mondays” and lead-footed “First Date” in addition to taking the time to answer some questions for us.

We’re coming up on the three year anniversary of when Tarra and Natalie first met, are you guys gonna engage in any celebration for the occasion beyond typical Fourth of July festivities?

We always celebrate July 14th- the anniversary of our first show. This year it looks like we won’t be touring and we’ll be going to my neighborhood Italian street fair the church puts on every year in Brooklyn.

Since that fateful day, what has been the most surprising thing that’s happened to you as a band and what are you most proud of with Sharkmuffin?

The most surprising thing that’s happened so far is playing a couple of Pat Benetar covers with Bumblefoot at a Two Boots Pizza opening party in Park Slope last November. What I’m most proud of is our new record, Chartreuse, that we recorded with Patty Schemel on drums.

Night Light was the easiest because it was very cathartic. Natalie started playing guitar and I puked out all the crap that was going on in my life at that point.

Tampons are for Sluts was challenging because of it’s tempo change most of our drummers had a hard time getting a beat down to it.

What instrument would you say is most critical to your band’s DNA?

Bass, I feel like it’s the most solid, driving force in our project.

Who or what are some of your non-musical influences?

The painter Francis Bacon, I want to write songs like how he paints.

Of all the house shows you’ve ever played, which was your favorite? What is it about house shows that appeals to you?

We just played at The Asbestos Farm in Hadley, MA and had an amazing time. Our host, Robin, who has his own project called Pits, took us to a really beautiful waterfall and we had a really lovely day before the show. And the show was definitely the best of the whole tour. There’s something about playing on the floor and not raised up on a stage that makes people get into it more.

What do you all have planned for the rest of 2015?

Hopefully getting our own limited edition Ben & Jerry’s flavor & taking over/touring the world!