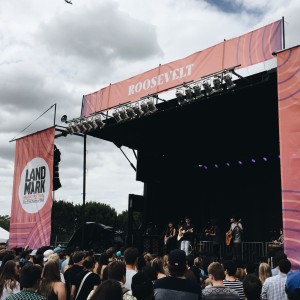 DC-proper is finally home to a proper music festival now that the Landmark Music Festival has landed. Last weekend the inaugural event dodged most of the usual hiccups that mar first festivals. I’m hoping this fest, which hopes to raise funds for repairs on the National Mall, will live up to its name and become an iconic annual fixture here in the District.

It didn’t take long for the uniqueness of the festival’s setting to show itself as I walked into the grounds through the FDR Memorial with sounds of the early performers swimming about the granite and bronze. The sense of place further soaked into Landmark with the familiar DC sight of the Washington Monument in view from anywhere inside and the frequent helicopter flyovers, which humorously distracted the artists as they performed.

My festival experience officially started with the Virginia family band, The Hunts, who turned out to be my biggest surprise of the day. The Chesapeake outfit’s cheery folk mixed in some world music elements to better color their sound. This helped distinguish the group from the dime a dozen ho-and-hey folk acts running about. Additionally, The Hunts’ shared genes provided an impressive chemistry that extended itself both sonically and personality-wise.

It was truly great to see George Lewis Jr, the man behind Twin Shadow, back out after their bus accident earlier this year. His set was heavy with selections from his 2015 releases, the LP, Eclipse, and the mixtape, Night Rally, but still hit on older faves like “Five Seconds”. The quality of Lewis’s vocal performance was top shelf and my biggest takeaway from his set. 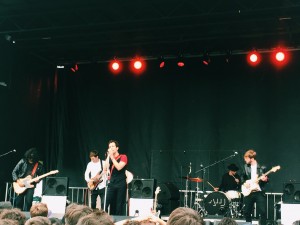 The next performance I took in was from another junior, Albert Hammond Jr. Hammond, who would be closing down the festival the following night on guitar for The Strokes, and who provided my favorite daytime show of the fest. Cheeky stage banter and a hose of hooks from tunes like “In Transit” and “Everyone Gets a Star” glued people to the Roosevelt Stage. 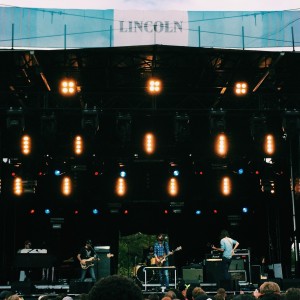 I got distracted on my way over to Band of Horses at the Lincoln, by the sounds of Daughter’s killer “Youth”. The British band played a pristine set that spellbound the crowd. The dreary calm of Daughter was soon broken by the bearded bash of BOH. That outdoor space really gave their giant-sized tunes like “Cigarettes, Wedding Bands” and “Funeral” room to breathe. 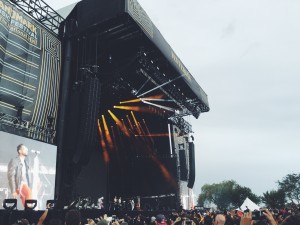 Landmark provided a loaded lineup that made for some tough decisions, but they thankfully kept things punctual so you could time set splitting with confidence. This allowed me to catch the Instagram anthems of Nate Reuss as well as the carnal intensity of Miguel.

While everything under the festival’s control, save for Saturday’s drink lines, rolled out smoothly, even the elements beyond their management were favorable. Though the sky was paved with cloudy cobblestones, it mostly held and the few times when it didn’t, like during The War On Drugs show, it enhanced the mood. “Red Eyes” hit that much harder with the band was punching it out through sheets of rain. 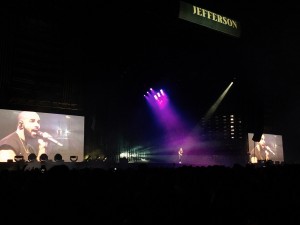 It’s harder to think of someone in music right now who’s bigger than Drake. He closed out the first day of Landmark Music Festival in a manner appropriate of the previous sentence. It’s easy to forget how many jams Drake has won us over with throughout the years, but he jogged everyone’s memory by trotting out champs like “Trophies”, “It’s Over”, and “Legend” one after another. Holding the stage down by himself, Drake’s set was pure entertainment and capped by his famous line from “Know Yourself” and a marquee fireworks display. 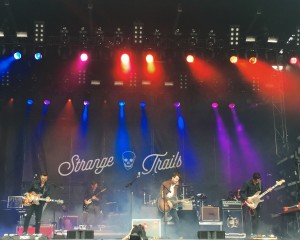 Day 2 of LMF didn’t waste anytime in getting going as Indy’s indie darlings, Houndmouth, offered up a powerful set of fuzzy folk before Lord Huron used nets of catchy manifest destiny musicality to sweep in a giant crowd of festivalgoers. Ben Schneider of the LA-based LH, a true fan of scenery, marveled at the setting for the festival.

Another afternoon highlight came at Jefferson stage where I took in TV on the Radio’s set from the cheap seats and was blown away by the reach of their whip-smart rock. The next set block was dedicated to the body as I halved my hour between Dan Deacon’s playfully experimental tunes and Chromeo’s refined party. Both artists got their audiences moving and didn’t let up. 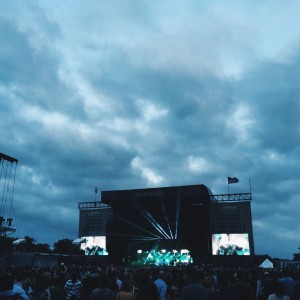 An intense light and video show powered Alt-J whose songs sounded as huge as they were gorgeous. The mash of genres and styles on cuts like “Every Other Freckle” and “Breezeblocks” touched on so many of the vibes of the Landmark Festival’s lineup.

Since it was Sunday, CHVRCHES definitely took us there as frontwoman Lauren Mayberry lulled us with charming stage banter, before slamming the crowd with her throttling and thrilling vocals. 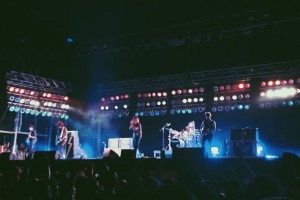 It would’ve been hard to script a better ending to the Landmark Festival than the Super Blood Moon turning off the lights following The Strokes rollicking set. The Strokes still have it as they played winner after winner like “Reptillia”, “Last Nite” and “Tap Out”. The New Yorkers could’ve kept playing till midnight and still not run out of top shelf material.

Throughout the festival I unofficially raked guests for their opinions and heard no dealbreaker complaints. The first days minimal kinks were worked out by Sunday, the sound system shouted sublime, and I never caught a down set. I did however hear lots of compliments. The biggest of which, echoed by myself, was that people were already looking forward to next year’s event.