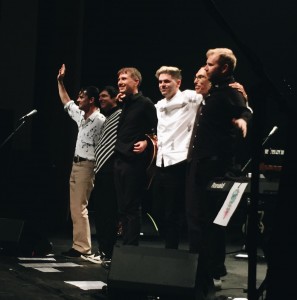 If anyone found themselves at DC’s Lincoln Theatre last Monday, October 5, who wasn’t already a fan of either Franz Ferdinand or Sparks, I doubt they would’ve suspected FFS was a supergroup and not just a group whose lineup was always just so. The sextet blended together seamlessly, with a wrinkle or two being the only clue that the group might not share the typical band origin story of former schoolmates.

FFS’s self-titled debut is populated by characters of melancholy and whimsy like Johnny Delusional, The Man Without a Tan and the Policeman’s Wife, the former two were the first ones to grace the stage as both received rollicking treatments. The Policeman’s Wife of “Police Encounters” then followed and, while a thumper itself, the song gave the band a breath of air before they jumped in to Franz Ferdiand’s “Do You Want To?”, which glues each and every one of its hooks to listener’s brains for at least a week.

The frenetic New Wave of “So Desu Ne” highlighted the waistline of the set even before it concluded with Russell Mael, Alex Kapranos, Nick McCarthy, and Bob Hardy all playing on the same keyboard at the same time. That cut was trailed by a spirited take of Sparks own synth-classic, “The No 1 Song in Heaven”. Unsurprisingly, “Take Me Out” owned the shady side of their regular set. It’s riffs and hooks somehow sounded even bigger in person.

FFS bowed out their show and encore on the perfect note with the self-aware tour de genres of “Collaborations Don’t Work”. The song’s diversity flexed the band’s technical skills and was nailed thanks to the guys’ skilled theatrics.

The parties involved with FFS have professed that the team-up was more than a whim or gimmick and seeing their chemistry firsthand, I have no reason to doubt them.