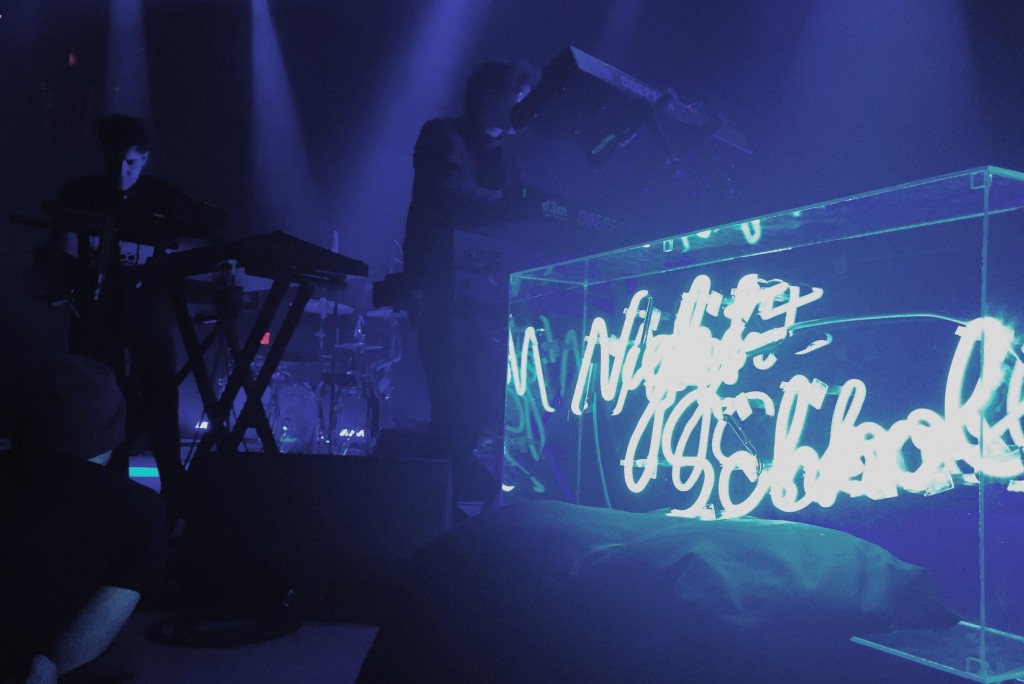 This was my first time seeing Neon Indian live and for someone who’s constantly plastered with the chillwave tag, Alan Palomo put on one of the more energetic performances I’ve seen all year this past Tuesday, October 13 at DC’s 9:30 Club.

Sounds of Italian discotheques, Yacht Rock, oriental arcades, infomercials, and powder-fueled New York clubs from the 80s were all on the menu of Neon Indian’s setlist. They started things off with some appetizers from their new album, VEGA INTL. Night School, which came out a few days after the DC show on October 16th, with the friendly sleaze of “Dear Skorpio Magazine”, the video game reggae of my fave from Night School, ”Annie”, and the trippy funk of “The Glitzy Hive”. Palomo then looked in the rearview as he trotted out the blissed stroll of “Terminally Chill” before shifting right back into the new material, which dominated the show, on the shrugging stutter of “Street Level”.

Older cuts were turned to again to bow out the regular set. The crowd assisted mightily on the slacker celebration “Deadbeat Summer” as well as the digitally wistful “Polish Girl”. Our encore dessert was dished up on the tour of 80s studio sounds that is “News From the Sun.”

All night, Palomo burned calories as he worked the stage. He fully filled the role of frontman as he turned the crowd into a marionette that clapped when he wanted, moved when he beckoned and sang along at his direction. The new tunes sound even more at home blared in a big room instead of pumping in headphones, which is was not the case for the older tracks. That is not to say, his back catalog was lacking live as my biggest complaint with the show was that I didn’t get to hear if “Hex Girlfriend” could match the in-person gorgeousness of the aforementioned Psychic Chasms and Era Extrana numbers.

However, that’s the point Palomo has reached with Neon Indian, three albums in now. He’s got such a vault built up, that plenty of top shelf material won’t make the concert cut. Who can argue though when the chef’s got such good taste!