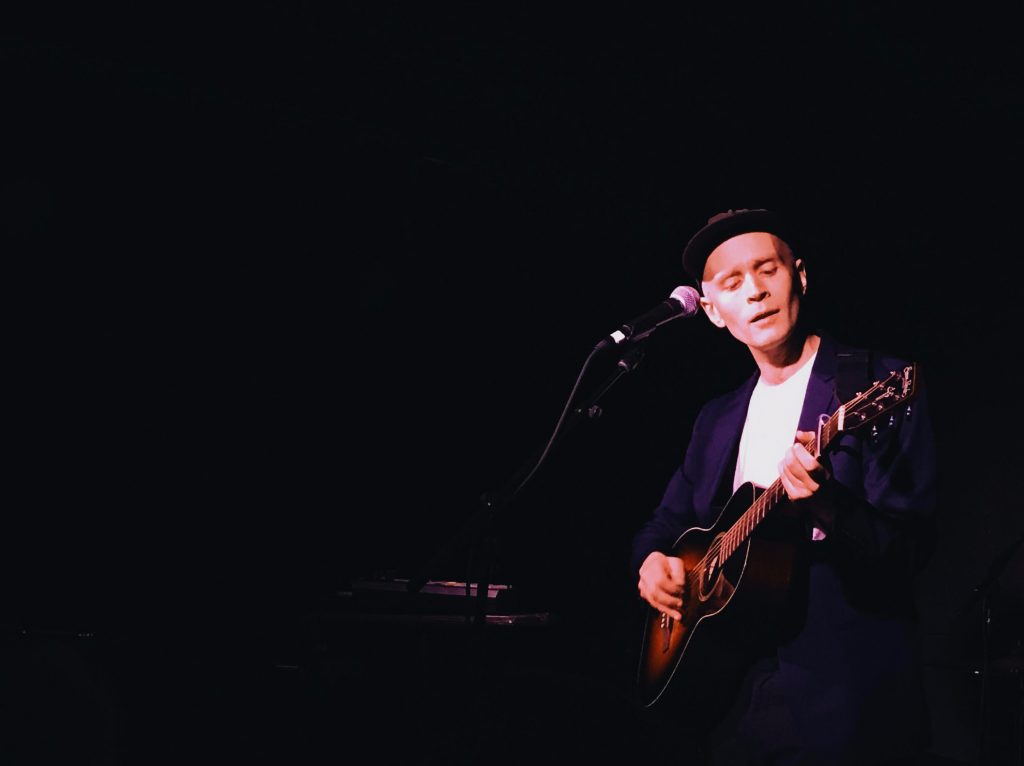 Jens began his set at DC’s U Street Music Hall on Thursday, March 16 by charmingly hat-tipping himself on the self-referential “To Know Your Mission”. The nostalgic number, performed by Jens alone on acoustic guitar, still stirred despite missing its pitch-bending samples and shape-shifting, time signature-forging beats. He then cued up a simple programmed beat before cuing in the rest of his backing band to join him on the lead single, “What’s that Perfume that You Wear?”, off his new album, Life Will See You Know – a track that details olfactory pining from a beach vacation using an auditory collage of a beachy locale’s sounds (Jens wittily and awesomely peddled a pastiche of the aforementioned perfume as tour merch that I was sadly unable to get my hands on). Each chorus of the song birthed a moment of pure concert bliss that was further lathered by the scent of the merch perfume whose appearance might have been imagined or the result of a spill or a Jens-intended effect. Thematic cohesion was continued with the gusatory sentimentality of “Sipping on the Sweet Nectar”, which showcased Jens at his crate-digging, sample-stamping best.

The airy, blissed sample on the meandering “Hotwire the Ferris Wheel”, which sounds like the gentle coo of pleasure from Ferris Wheel riders, helped carry the song. While still great, the song sometimes lost its shape and missed the texture of Tracy Thorn’s vocals from its recorded form. The best descriptor of depression this side of Sylvia Plath, and one of Jens’ best songs ever, “Opposite of Hallelujah” emerged next with Jens ending the song by miming xylophone plucks. The strumming bounce of “I Know What Love Isn’t” followed as one of the few representatives of Jens’ last LP of the same title. Already one of his most humorous songs, the cut became even funnier live with it’s second verse lines calling out the pda of concert-going couples.

Emelie Odelberg, Jens’ bandmate on keys and samples, teamed with Jens to star on the literal and literary “How We Met, the Long Version”, which gave us a few more pulls of live music bliss, especially when the chorus of The Chairmen of the Board’s “Give Me Just a Little More Time” bubbled up, swirling together one of the best 70s vocals takes with one of the best songs on Jens’ new album. Speaking of superlatives, one of the better batches of lyrics I’ve heard in a while was on display during “Wedding in Finistere” as Jens captured growing up in a little over twenty words. Even though he humorously forgot/mixed up a string of lyrics, Jens still managed the more difficult feat of spitting out all twenty some words of the chorus in half as many seconds.

Throughout the night a hearty audience singalong greeted Jens whenever he offered us the mic so when he instructed the crowd to sing along like they were in church before beginning “Black Cab”, he was obeyed with ecclesiastical ecstasy. Live, the song exchanged the low-registered dreariness of wrestling with late night practicalities, thought patterns and options from its 2003 recording for the relaxed reverence you get when you can reminisce on less than ideal times with a smile now that you’re free of its existential taxes. It was an attitude carried on and fulfilled on the closer of his regular set, “Dandelion Seed”. It was nice to see Jens breathing it all in, his entire career, a sold out venue, an inspired new record and just enjoy the moment during the song’s outro, after his “The wind is like a string section” observation. Smiling and with eyes closed Jens almost looked like was back in Gothenberg, making the germinal connection of a timeless sounding string part and the even more timeless sound of wind pushing through a shipping yard or blowing dandelion seeds.

For his encore, Jens started with his treatise on the disconnect between male-female romantic communication, “Maple Leaves”, which like “Black Cab”, didn’t seem as downcast coming 2017 Jens live – the bitter to sweet ratio tipped more for the latter. Jens’ first encore-closer “Postcard to Nina” also took on a new light as Jens framed his famed tale of being a Beard in Berlin within our current cultural climate. His exhortation of “Don’t let anyone stand in your way” changed from personal encouragement to public rallying cry. The effect was cathartic. Jens built off this after coming out for his second encore and final number, “The End Of The World Is Bigger Than Love”, whose DC-dropping lyrics juxtaposed today’s political dismay with the elation of the night Obama was elected in 2008. Instead of just being an exercise for the audience to sip on the sweet nectar of our memories, it was a showcase of Jens bulls-eyeing the light in the end of the tunnel in the way only he can.