The Wood Brothers Tear it Up in Minneapolis, set to Release New Album 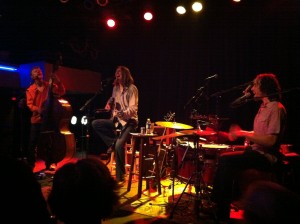 If you’ve been feeling the pull and tug of your dancing shoes, and they aren’t the type pulling you to the nearest clubs, then you need to go see the Wood Brothers, and you need to do it soon.  The rollicking bluesy folk of the brothers, particularly evident on their upcoming record Smoke Ring Halo, reaches a whole different level live. Only in person can you appreciate the true virtuosity of Chris Wood, the younger brother who made his initial mark as the bassist of progressive jazz band Medeski, Martin, and Wood.  Only in person can Oliver, the elder brother and crooning guitarist of southern blues outfit King Johnson, pull you so deeply into the universal grind of the blues you momentarily forget yourself – just ask the 200 hundred or so attendants of their most recent show in Minneapolis who are still catching their breath.

The brothers will shortly be releasing their fourth full-length record, Smoke Ring Halo, and their first with original material since 2008’s Loaded. A release date has not yet been set but the first single, “Shoofly Pie,” is available on iTunes and another track “Blue and Green” is accessible on their website. (If you need further incentive to seem them live, they are selling the new record at their shows).  The album is more straightforward blues but it contains a richer array of harmonies and instrumentation then their previous albums, while still showcasing the simple and effective songwriting and exceptional musical talent. Some particularly fantastic tracks are “Pay Attention,” “When I Was Young,” and “Blue and Green,” but the record has no weak links.  The album is good; their live shows are fantastic.  Go see them and do it soon.