On March 25, 2010 Ben Folds returned to the Triangle for a concert with the North Carolina Symphony Orchestra. Fans of the North Carolina-born musician always come out and show their support when he performs in the area, particularly for the Ben Folds Five reunion concert in September of 2008. That was the last time that Ben was in the Triangle for a performance.  Following that special reunion concert, Ben recorded the “University A’ Cappella” album and “Stems and Seeds” album. He also toured the world performing with different orchestras, most notably the Perth Orchestra in Sidney, Australia which was recorded and sold on DVD. It was during this tour that he came to the Meymandi Hall in Raleigh Memorial Auditorium.

During this fantastic concert, Ben told the stories and meanings behind many of his songs such as “Steven’s Last Night in Town,” “Cologne,” “Hiroshima (B-b-b-benny hit his head!),” and “The Ascent of Stan.” He also heavily encouraged audience participation during songs such as “Not the Same” in which he taught the audience different parts to sing and acted as a conductor signaling us when to come in. The audience was happy to oblige and Ben was as excited as a kid in a candy store. 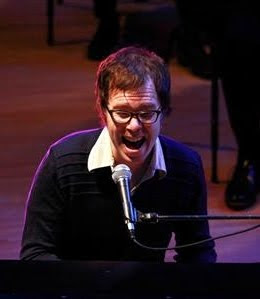 Not only did Ben sound just as he does on albums, or possibly better, he brings an energy to the crowd. The audience, whom I can guess were mostly college students to adults in their mid-thirties. Were having a great time in the very chill and relaxed atmosphere. There were no crazy teens standing and dancing around obstructing the views of others. Everyone was able ot sit comfortably and listen the magnificent piano playing of a local genius playing intricate rhythms and melodies on the piano such as “Lullaby,” “Effington,” and “Magic.”

Ben finished the concert with three encores including: “Rockin’ the Suburbs,” “Army,” and “Brick.” The final song “Brick” he did alone without the orchestra, just Ben and the grand piano. This last song was a simple and beautiful way to end the concert with such a calm song and a great contrast from the beginning with the full orchestra and high energy song. Although he did not perform my personal favorite song of his, “The Luckiest,” he still did not disappoint. This was one of the best concerts I have ever been to, definitely in my top 5. I would highly recommend going to a Ben Folds concert, you will not be disappointed!

Did you know NewMusicMonkey has a website? Go see what you're missing…
Blame it on: newmusicmonkey on February 7, 2011.on March 14, 2011.