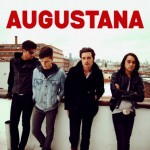 Most of you probably remember the song titled “Boston” from a few years back. And no, that song isn’t done by The Fray… but whether or not you know who it’s done by I’m sure you can track with me when I start singing “I think I’ll go to BOSTONNNN!” You with me? Yeah, I thought so. That song was mercilessly beat into our brains by shrill voiced radio DJ’s and whatever heinous methods shopping malls use to pick their supposedly magic “you will spend money here” vibe enhancing tunes.

All of that to say that while you probably know that song you’re missing out if you haven’t heard the two albums they’ve released since them. The latest one, a self titled album, was released only yesterday and is worth your time and money to check out. Which brings us to the album at hand…

Augustana is what I classify as sound-shifters… like the musical version of a shape-shifter (Harry Potter fans holla!). Where they once created music that sounded like The Fray with slight Bob Dylan undertones they’ve shifted their sound with the times (survival 101 in the radio pop industry if you ask me).  Right out of the gate you will hear what could have been a bonus track off of a Killers album and the rest of the album follows suit. The musical mimicry is so blatant that I almost feel guilty saying I love the album… almost. But I adore The Killers and I love Brandon Flowers‘s solo work and I’d be hypocritical if I said that I didn’t love this album as well. So I’ll just have to temper my praises of this album by saying that I view Dan Layus and his fellow band mates as money malingerers and music scene whores. As long as we’re clear on the fact that they’re here to make money and make it big even if it means throwing originality out the window then we can proceed.

Personally, I’m betting Counting The Stars will replace Vega4’s Life Is Beautiful as best sappy family drama preview song, but that’s not necessarily a bad thing. On The Other Side and A Shot In The Dark are fantastic, but only slightly more fantastic than all of the other tracks. I don’t care how much they rip off anyone else I’m still impressed. Hell, I’d rip off Mr. Flowers if I was nearly talented enough to do so…

Overall it’s a well produced, hook driven, album that will enhance any playlist but can also stand on it’s own. Sound-shifters they may be, but that doesn’t mean they’ve ever picked a bad sound!

PredictablyMe Has Written 21 Articles For Us!

I’m just one of the many DuPrees out there. Most people in my family do really interesting things like making knives, guitars, music and origami birds… I have a blog and an eight to five desk job. I love writing and since said desk job allows me to listen to a lot of music I’d say if you’re any good at math you’d know that a love of music + a love of writing = a love of music review blogs. So bada-bing bada-bang, here I am.

I also, from time to time, go by The Iron Fist… or PredictablyMe.

Did you know PredictablyMe has a website? Go see what you're missing…
Blame it on: Madison Dupree on April 27, 2011.