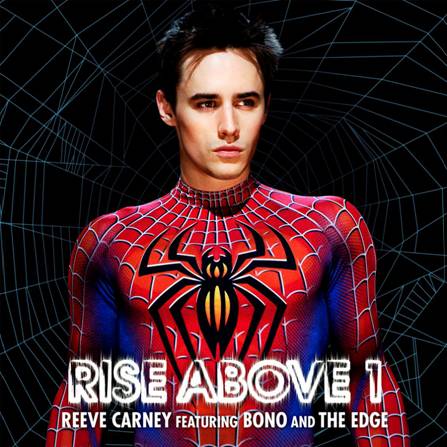 Music From SPIDER-MAN Turn Off The Dark will be released on June 14th by Interscope Records.  With 14 new songs co-written by Bono and The Edge for the Broadway production,  SPIDER-MAN Turn Off The Dark, the album is produced by Steve Lillywhite. Songs are performed by the cast including Reeve Carney in the role of Peter Parker/Spider-Man,  Jennifer Damiano in the role of Mary Jane, T.V. Carpio as Arachne and Patrick Page as the Green Goblin, with contributions from Bono and The Edge and music performed by the production’s twenty member strong orchestra.  The release date coincides with the opening night (June 14th) of the Broadway show.

Carney is the frontman (on lead vocals and guitar) of the Los Angeles-based rock band Carney. His band-mates, Zane Carney (guitar), Jon Epcar (drums), and Aiden Moore (bass), perform nightly with the Broadway orchestra of SPIDER-MAN Turn Off The Dark.

SPIDER-MAN Turn Off The Dark, the most ambitious production ever under taken on Broadway, is currently in previews at the Foxwoods Theatre on West 43rd Street.  Lead producers Michael Cohl and Jeremiah J. Harris recently announced that Philip William McKinley, Roberto Aguirre-Sacasa, and Chase Brock have joined the creative team to help implement new staging, assist with book rewrites, and create additional choreography, respectively. McKinley has vast experience directing technically complex productions on Broadway and beyond. Aguirre-Sacasa is an acclaimed playwright, screenwriter (Big Love) and a noted writer of Spider-Man comic books. Brock is an innovative choreographer experienced with large Broadway shows.

cvalero Has Written 79 Articles For Us!

Did you know cvalero has a website? Go see what you're missing…
Blame it on: cvalero on June 8, 2011.