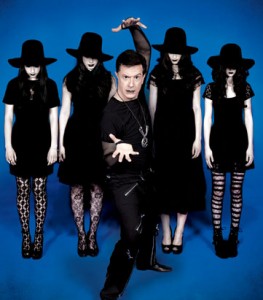 Stephen Colbert and The Black Belles

Last night on The Colbert Report, host Stephen Colbert took yet another unprecedented step in fake-late-night-news host history. He released a single, produced by one of today’s most renowned musicians: Jack White. Colbert’s single is entitled “Charlene 2 (I’m Over You)” and is a sequel to his Stephen and the Colbert’s single “Charlene (I’m Right Behind You). Both were performed for the first time last night with The Black Belles. Steeped in raw, White Stripes-style blues rock and pure hilarity, the songs have the clear imprint of Jack White’s songwriting. The Black Belles performed both songs well and provided a great contrast to Colbert’s Wall Street style suit with their pale painted faces and black lipstick. The single is available on iTunes, but I would recommend picking up the 7” vinyl from Third Man Records at thirdmanrecords.com. For those of you who don’t know, Third Man Records has become Jack White’s primary project since disbanding The White Stripes. Third Man is riding the resurgence of vinyl. You can find any of Jack White’s projects (The White Stripes, The Raconteurs, DeadWeather) on vinyl in their on-line store, as well as many up and coming indie groups such as The Greenhornes, Dex Romweber Duo and even Conan O’Brien.

maljr12 Has Written 13 Articles For Us!

Mike Little is…
Founder and CEO of Mike Little Presents in Raleigh, NC