In the wake of Los Tiki Torpedos wipeout, The Hellfreaks were formed. In Budapest, Hungary, guitarist Yoda Surfer and then drummer Shakey Sue reformed with Sue as a vocalist fronting an edgy psychobilly horror themed band. Peter Pain (on drums) and Bloody hully (upright bass) soon rounded out the line-up.
This all happened in 2009. By 2010, the Hellfreaks released their first full length, HELL SWEET HELL, on the German Longneck Records, offering up some rock solid, swinging, full tilt and unrelenting psychobilly about Boogeymen, Horror Shows and the contemplation of death.
Shakey Sue sits down and offers her thoughts on all things HellFreak for your reading pleasure.
M.Alberto Rivera: What or who inspired you to play Horror themed music?
Shakey Sue: You have to thank my parents for this.
At the age of 5 they allowed me watching X-Files, which was okay for a while until Mini-Sue didn’t want to go to sleep one day and I told my parents I cannot sleep because an alien is hiding in my room…. Since then I really started having fear in the darkness. Fear in the darkness supported with a well-developed fantasy provided by the X-Files. This might sound ridiculous but in this time a lot of stories were created in my head which can be used for a whole bunch of records of The Hellfreaks

Today I live next to the biggest graveyard of Budapest (Capitol of Hungary), pretty close to a forrest..this could be the scenery of infinite great horror movies. To be honest the candles at the graves give me a kinda romantic feeling.

MAR: Is it hard to write song lyrics in English when it’s not your first language?
SS: This might be surprising but I don’t feel ready, yet to write Hungarian songtexts and so it is good that I speak also languages like English and German. Hungarian is one of the most difficult languages in the world, almost impossible to learn for foreigners. We have a very hard grammar and large vocabulary. To express the same feeling we have a lot of different words. This variety would be good for writing songs but finding a good harmony is a too difficult challenge. It is hard to express your feelings without making it sound childish or ridiculous, even though that the sound of it seems pretty strict. In general I think that the biggest challenge in our culture is to use the language in the right way.

MAR: Which songs do you enjoy performing most?
SS: Boogie Man , If I Die Today& Horrorshow 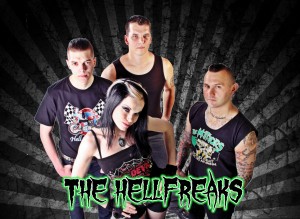 SS: Every film of Lúgosi Béla ! We are proud that one of the best vampire artists is a man from Hungary!

MAR: Do you ever feel restricted by the horror genre?
SS: Not really. Except of Boogie Man and Mr. Dead Kiss none of the songs is directly a horror story based song. It is more like that I use it to spice up own experiences, feelings and thoughts with horror elements. I don’t like to tell people what they should think. The best example for that is the song Queen Of The Psycho Scene. When you listening to it you first think it is a romantic ballad. While listening with more attention to it you realize that is about a girl which turns more and more into a creature of the night – Only a few people see what it is really about: It is about a tragedy of one of those who would do everything to get some affection, even give up everything they are and in the end they are no longer themselves. Nevertheless we don’t want to get pushed only in that horror direction. On the first record there were songs like We Prefer and Psycho Wrecking tonight, which were free of any horror related stuff. Without forgetting my favourite kind of spice we will take some more steps away from the horror corner in the future.

MAR: If the Hellfreaks could appear on the soundtrack of any scary film, which film and which song would it be?
SS: To use an own song somebody would first need to make the right movie for it. Mr. Dead Kiss would be a perfect story for it. If it would be a cover song then it might be the theme from Candyman.– „It was always you, Helen”

MAR: If you were going to be in a horror film would you rather be the villain or the innocent girl?
SS: I always want EVERYTHING!!!
For this case there would be a solution. As a Zombie I could be both. But since you can’t have both at the same time I would comb my hair away to let my devil horns shine in the light of the full moon and enjoy my time as villain – MUAUHAHAH

MAR: What does the band have planned for the next tour?
SS: Release a new record. rock the stages like hell, meet new people, meet new beer and collect stories that would make my grandchilds jealous.

Did you know Bertman has a website? Go see what you're missing…
Blame it on: Bertman on October 27, 2011.