On July 1st, Phish made their triumphant return to Raleigh and played their first show at Walnut Creek since 1998. During their most recent hiatus, the band released a DVD from their legendary 1997 performance at the venue which has had Triangle Phish fans itching for another performance. The anticipation was high in the parking lot and the lawn was full of fans of all ages several minutes before the band took the stage. The Vermont rockers did not disappoint. They turned the volume high right out of the gates opening with the up tempo “Llama.” The immediately recognizable drum beat was met with enthusiasm from the nearly sold out crowd. It was the first time Phish had pulled “Llama” out of their bag of tricks in 2010 and only the second time since 2004. As if “Llama” didn’t already suggest that it would be an epic night, the band then launched into Ween’s “Roses Are Free”, a true fan favorite. After jamming a newer Phish song, “Kill Devil Falls,” the band busted out Little Feat’s “Time Loves a Hero” for the first time since 2002. Phish nailed the song despite not playing it in a while, then played a standard but solid rendition of “Alaska.” A quick playing of “Water in the Sky” proved to be a nice sing-a-long that mellowed the crowd. It turned out to be the calm before the storm as Phish tore through “Runaway Jim” with extensive type-I jamming that smoothly transitioned into the always funky “Moma Dance.” This song turned Walnut Creek into a complete dance party for about ten minutes. The band then transitioned into some spacey type-II jamming, featuring dissonant improvised chord progressions and droning bass lines from Mike Gordon. The band was completely in stride at this point and had the crowd captivated. As the jam began to wind down, I got the sense that it could be the set closer. Wrong. As his bandmates slowly faded the jam out, Trey began playing the opening chords to “Divided Sky.” The crowd erupted and the band played the highly orchestrated classic beautifully. I thought for sure that would be the set closer but Phish proved me wrong again as they ripped through a rocking “Cavern” to close the set.

With the first set featuring a couple of tour debuts in “Llama” and “Time Loves a Hero” no one in the crowd really new what to expect from the second set. The lights went back down and the band took the stage and went into “Backward Down the Number Line” off of their 2009 album Joy. “BDTNL”, as it is becoming as to fans, was the first song released off the album and is quick becoming a regular part of Phish sets. As the final notes of BDTNL faded out, Mike Gordon stepped to the mic and, in his baritone voice, started “Halley’s Comet.” Hysteria. Glowsticks that fans had been holding on to all night immediately hit the skies and it looked as if they were actually falling from the clouds. They jammed “Halley’s” for a few minutes then transitioned into “Light” which the band is establishing as their new favorite song to add extended jams to. “Light” led very nicely into “Fluffhead” which prompted another glowstick storm. Trey missed a few notes here and there in “Fluffhead” but no one really noticed as it is an extremely tough song to play. After “Fluffhead” it was bustout time again as the band played Bob Marley’s “Have Mercy” for the first time since 1999. Then came the highlight of my night: Traffic’s “Light Up or Leave Me Alone” for the first time since 1999. Both songs received as a loud a response as I have heard since seeing the band’s return in Hampton in 2009 and also left as large a smoke cloud as I have ever seen hanging over Walnut Creek. Phish then cooled things down and let the fans sing their way through “Free” and the mellow “Wading in the Velvet Sea” before going into the jamming “Squirming Coil.” To end the set, Phish brought on one more glowstick war with the high energy and always fun “Suzy Greenberg.” Page McConnell’s clavichord solo garnered a huge response as always. “Suzy” is a song that the band never seems to get tired of playing and Phish’s fans certainly never tire of hearing it. It always combines high energy rock with funky interludes and is the perfect set opener or, in this case, the set closer.
Phish turned Walnut Creek into Raleigh’s biggest dance party one more time when they encored with Stevie Wonder’s “Boogie on Reggae Woman.” Vermont’s “phinest” did not disappoint Raleigh concert goers and left those of us heading to Charlotte for July 2nd’s show anxious to be back in the crowd. 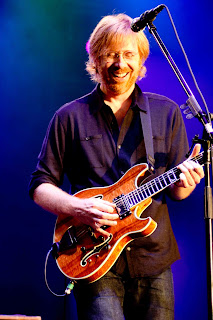 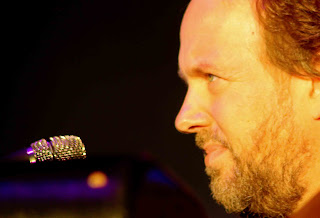 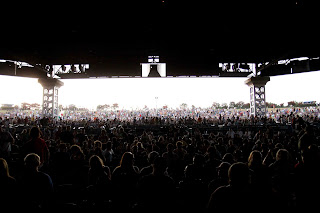 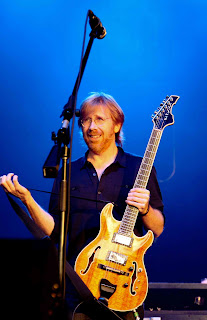 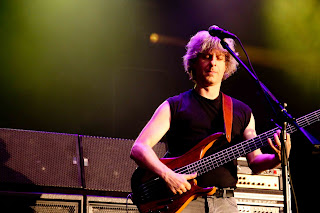 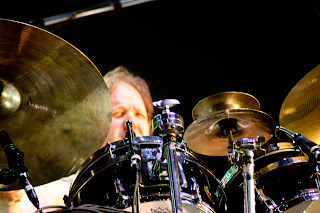 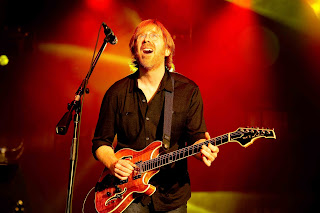 Did you know NewMusicMonkey has a website? Go see what you're missing…
Blame it on: newmusicmonkey on February 7, 2011.on March 14, 2011.