Not An Airplane – It Could Just Be This Place 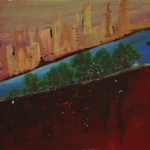 A record is, in its highest form, a complete statement – a definite and clear articulation of an abstraction. Dominated as these times are by iPods, grooveshark, and Pandora, it can be easy to forget that an album can be crafted as intricately as a novel, a poem, or a geometric proof; where every sentence, every note, depends on its surroundings for full expression while simultaneously supporting the whole. When we speak of our favorite albums we do not typically refer to a randomized collection of fantastic songs, we speak of the album as a whole; how the songs relate to and enhance each other, how the lyrics arc as a story (though not necessarily, by any means, through the cohesive narrative of a ‘deaf, dumb, and blind’ messiah or a fictitious band leader), and how the musical sentiments ebb and flow, crescendo and plummet.

It Could Just Be This Place, the official debut of California-based Not An Airplane, marks a solid affirmative in every one of those categories. Songwriter and lead-singer Nick Shattell has managed to cram almost every conceivable human emotion into thirty uninterrupted minutes. There’s no doubt the album which, like all great art defies simple stylistic categorization (Americana or country-rock would be the easiest labels to apply), was intended to be taken as a whole – it is broken down into only two tracks, “Speak In” and “Speak Out,” that contain roughly ten songs whose beginnings and ends are musically and thematically indiscernible, forcing the listener to consider the work in its entirety.  Among other things It Could Just Be This Place discusses the highs and lows of love, depression, self-doubt, life-affirming beauty, conflict and (sometimes) resolution, yearning, anxiety, and spiritual skepticism. But several things prevent the effort from falling victim to the pitfalls of platitudinous. There’s the sincerity that drips from Shattell’s sometimes firm, sometimes wavering voice like warm maple syrup, assuring the listener of complete and genuine introspection. And then there’s the fantastic work of the band that perfectly paces every particular sentiment with effortless aplomb, through distinct harmonies, varying tempos, and intense peaks and valleys of volume and vivacity.

What really makes It Could Just Be This Place so successful is the aforementioned unbridled honesty with which it was written.  When Shattell sings,  “Touching on subjects like God and the snow / is much more productive when you might turn to hope / Not the hope that’s supposed to make sense of this / But the hope that none of it even exists / Cause you can’t help but hate the way that you live / Oh fuck it, just fake it, they’ll never prove you did,” one gets the sense he is singing, not from a judgmental perspective, but from the view of one who has himself strayed perilously close to the path of apathetic acceptance of a less-than-fulfilling life, as we all do at some point.

“What you respond to in any work of art,” Kurt Vonnegut once wrote, “is the artist’s struggle against his or her limitations.”  Individually, the words of It Could Just Be This Place are not particularly profound but as a complete work, the album presents a struggle of stunningly vivid meditation.  The appeal to listeners is one of latent familiarity.  We can distinguish honesty in art because we recognize feelings we ourselves have had.

Visit notanairplane.com to purchase It Could Just Be This Place for less than two dollars.

Watch a live version of “Speak In.”