It’s Lonely at the Top 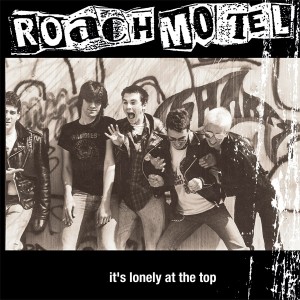 Packing a frenzied punch, this record is as ragged and full of vitriol as it comes. Roach motel was without question Florida’s first hardcore punk band and are/were as raw and unsettling as that first taste of homemade hooch straight from the still. And just like that jarring first taste, you’ll be back for more. A neurotic edginess runs throughout such classic titles as “My Dog’s into Anarchy,” and “I Hate the Sunshine State.” Clearly no one was trying to please the state’s tourism board, not then and not now. “It’s Lonely At the Top” is a collection of RM’s singles and compilation releases as well as two live cuts. The glorious train wreck of “We’re an American Band” closes out this LP.

The distorted guitars are thing and jagged like broken glass and twice as sharp. Once upon a time, a hardcore bands recording budget came down to the loose change in their pockets. This is what it sounded like. Nervy, determined and twice as pissed as just disturbed hornets nest; and it holds up exceptionally well. This is far more than nostalgia or a musical history lesson. This is an original blueprint for all things punk, and you stand to learn a thing or two.

Did you know Bertman has a website? Go see what you're missing…
Blame it on: Bertman on February 18, 2012.