On most nights, Greensboro’s Carolina Theatre is rolling out the courteous classics of the late Audrey Hepburn. But this was not most nights. Hinder was in town with expected rock bravado, playing songs from their new album All American Nightmare. The album is whiskey-fueled, filled with fist pumping Crüe-esque singalongs combined with assorted ballads that would not be out of place on a Kenny Chesney or Tim McGraw album

Hinder started off the set drop kicking the adoring crowd in the face with the pile driving rock they all came to see. Joe Garvey churned out riffs that would have made another Joe (Perry) nod in approval, while drummer Cody Hanson showed that his dedication to studying in the school of Phil Rudd has more than paid off. The entire band played in perfect musical stride, proving to anyone in doubt that they more than deserve to have shared bills with the likes of Nickelback, 3 Doors Down and Mötely Crüe.

Austin Winkler showed off his frontman chops by ensuring everyone in the audience was hanging on his every lyric, pelvic thrust and “get on your *&^%ing feet” gesture. Whether it was time for a ballad or balls to the wall rock, Winkler made sure the crowd was hanging on his every note.
Kicking off the show were up and comers, out of towners, Kopek and My Darkest Day. They set the tone with energetic sets that made sure the crowd would not fall into a hopeless lull. The highly regarded Saving Abel was the act which preceded Hinder. Their performance left me asking the question, “who should be the headliner of this tour?” 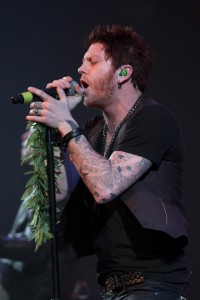