I first discovered Charlie Yin a year ago after reading a review on his project Robot Science. I fell head over heels in love with the album Square. It reminded me (in a very good way) of the Richard D. James Album by Aphex Twin but with a much heavier influence from 8-bit, nerd inspired styles.

Since then Yin has released another album under the Robot Science banner called Good Luck. Good Luck is solid but seems to be pulled in two different, conflicting, directions. On one hand it leans towards the quirky sounds of Square while on the other hand it explores dub-step rhythms and electronic dance with influences from Gold Panda and the like. When I first listened to Good Luck it felt as though Yin was limiting his usual clever and inventive style. The adherence to dub-step rhythm (bass hit on the first beat followed by a snare hit or clap on the third with shuffling) held the album back.

Then I listened to Yin’s primary project, Giraffage. Heavens be blessed for sending us such a clever, intriguing, and joy inspiring song writer. 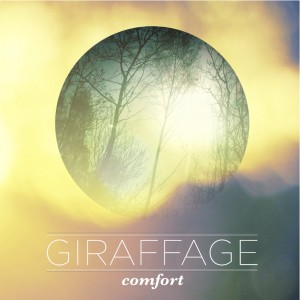 Giraffage’s new album Comfort begins with the track Moments. Immediately all of the short comings (of which there were few to begin with) of Robot Science’s Good Luck are shed away. The rhythm is layered and complex. Yin plays with dub-step rhythm instead of being anchored down by it. Cute shakers and live drum samples come in and out with the melody and underlying chords.

Yin has also utilized his talent for samples (one of many talents) very efficiently in this opening track. Tracks like Forest and The Notion of Backwards Motion from Robot Science used samples primarily as atmosphere and quite successfully at that. Now with Moments the sampling has taken a more active role in the song. It reminds me very much of The Books or Blockhead’s style of sampling.

The second track, LUV, is absolutely the strongest song on Comfort. We’re drawn in with a heavy use of samples and a somewhat basic adaptation of dub-step. But instead of delivering the expected release of “dropping of the beat” found in disco and techno, the rhythm and chords come in at sporadic bouncy off beats. It feels as though Yin is playing with the audience who is left with the biggest grin on their faces. The song becomes exciting and drives forward unlike the usual drag of dub-step (not to say the drag is a bad thing).

Yin’s rhythmic and melodic candy filled songs will have your ears chasing after them for another taste. It’s too darn cheerful and enjoyable not to give it a listen.

Did you know tbrowne has a website? Go see what you're missing…
Blame it on: Taylor Browne on March 10, 2012.