After the release of their second album Arm’s Way it was hard not to fall in love with Islands. I was a fan of the band within ten seconds of the first track The Arm. With a strong and clear influence from The Who (best band ever), a dark and biting tone, and an overall kickass energy its easy to see how as a young man/teenager I got goose bumps when listening to tracks like Abominable Snow and J’aime Vous Voire Quitter. Needless to say I saw Islands twice that year; once on their tour for the album and again during a free SXSW show. 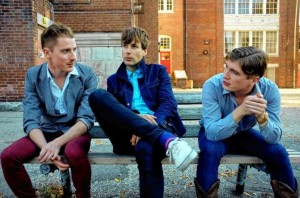 Upon a first listen to A Sleep & A Forgetting I tried to compare it to Arm’s Way just like I did with Vapours. This was a silly mistake that my second-listen-through-self rectified. The most consistent thing about Thorburn (besides the band’s…well…island based themes) is his tendency to constantly change his style. It is difficult to pin Thorburn down. With every album and every new project he changes his mind about who he is as a songwriter. His mark however is always very pleasantly present. The tones and styles of previous Islands work are here in full force but, if one could guess from the title, are subdued.

Thorburn wrote A Sleep & A Forgetting after his nine year relationship ended. The album clearly reflects his shaken emotional state. Having very recently been dumped myself after a two year long relationship I have found immense solace and comfort in listening to this album. Oh Maria made me cry. When the final track Same Thing ended my eyebrows made the same expression my dog’s make whenever he runs out of food and looks up at me as if to say “please sir, may I have some more?”. This sweet, painfully honest, and sad ballad filled album is superlative and should be owned by, well, everyone.

Did you know tbrowne has a website? Go see what you're missing…
Blame it on: Taylor Browne on March 14, 2012.