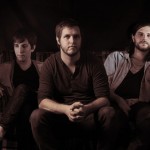 From Abilene to Austin, over the years The Rocketboys have seen a name change, loosing members, and relocating  yet remain to be one of Austin’s most talked about bands. I remember seeing them years ago under their former name Homer Hiccolm & The Rocketboys. While their original EP remained a constant in my playlists, for a time I lost track of them. But after the dust has settled on a very eventful few years for this fantastic band, it seems that The Rocketboys are back on the radar to stay.

The Rocketboys have had a fresh burst of energy and they were taking SXSW by storm. Since they now call Austin home, it only makes sense that they would be present at SXSW. Anyone could see that they were certainly making the most of it with several days packed with shows, sometimes back to back. And they were nice enough to take some time to speak to me about their upcoming album before their set at The Rattle Inn.

So you have a new album coming out soon right?

The Rocketboys: Yes, on June 5th our album “Build Anyway” will be out.

It’s been a while since you guys have had an LP out, and I know there are a lot of people really looking forward to having some new material. But I know a lot of the delay has to do with loosing a few members. Has this changed your writing style?

The Rocketboys: Yes it certainly has, but there are pros and cons to it. This time around it was definitely more of a feeling of “fewer cooks in the kitchen”, so in some ways it gave everyone a little more room to be creative.

That makes sense. How did the recording work? Did you have to hire people to come in for recording or do all of you happen to be multi instrumentalists?

The Rocketboys: A little bit of both, we have a guy playing drums for us right now, and he also did the recording. But the three of us did everything else.

Where was your upcoming album recorded?

The Rocketboys: We actually recorded it our house. And we have a guy, C.J. Ericson, who is doing the mixing.

I’ve actually talked to a lot of bands lately who have been going that route in regards to recording. Have you worked with C.J. before?

The Rocketboys: Well we’ve known of him for a little while now, since he now lives in Austin. He has come to a lot of our shows and we’ve been talking about working together for quite a while but the opportunity never came up. But this time we knew we were recording it ourselves so we wanted to supplement that with a really great mixer, so this was really the perfect opportunity. Actually, when he first introduced himself to us he said he worked with U2! We were like, “Who is this weirdo!” because that’s just such an unbelievable name drop! But soon we found out that he was for real and that he liked our band. He’s a super nice guy and very talented.

Wow, I don’t think I would have believed that at first either! It comes off a little too fantastic to be true. But speaking of name drops I have seen rumors online that you guys are actually friends with the real Homer Hickam, your original namesake. Is that true?

The Rocketboys: Yes that is actually true!

Is that the reason for the original name? Or did you meet him afterwards?

The Rocketboys: We met him pretty recently after our first EP came out. I guess someone heard about it who knew him and emailed him. And so I think we were on our very first tour ever, and we get an email from him. None of us believed it! We thought there was no way that this could be the real guy. But it turns out that it was, he’s actually always been super supportive of us… in fact he just wrote on our facebook wall a few weeks ago. And we even played at his birthday party a few years ago, in his home town of Huntsville, Alabama. He even offered at that time to let us spell his name correctly.

Did you misspell it originally to avoid copyrights, etc?

The Rocketboys: As a matter of fact, we did it because we didn’t actually know how to spell his name!  There was no foresight into it at all. But he’s always been super supportive, and we try to always send him our new stuff and just keep him updated.

That’s really cool. Are you guys going to be hitting the road in support of the new album?

The Rocketboys: Yes we’ve got some dates coming up around the release of the album. And we’re planning on doing a lot more touring this year. We’re looking forward to getting back out on the road again, for sure.

I’m curious, because I know that you guys aren’t signed to a label, is it because the right thing hasn’t come along? Or are you anti-label? I know this has been a pretty hot topic in the industry lately…

The Rocketboys: I wouldn’t say that we’re anti-label. We’ve done a lot of talking to various labels over the years, but it’s like you said, it seems like the right thing just has never come along. We’ve always been able to do pretty well for ourselves on our own, we’ve got a great team of managers, publicists, and people who cover our licensing. So really we have a lot of stuff in the Rocketboy machine. If something came along that was great and way better than what we have going now, we wouldn’t be opposed to it. But for now we feel pretty good about the way things are going.

Have you had to revisit how you play a lot of your old material live with the change in members?

The Rocketboys: Well we have two other guys playing with us for now… so really there weren’t that many adjustments to be made. As far as live settings go we only had to adjust from playing with six members to five.

Five musicians is still plenty to accomplish the full sound that fans get on your albums.

Rocketboys: Right, some of the old songs needed a little reworking, but the newer stuff was written with fewer members so there wasn’t an issue.

Excellent, well I’m not going to take up much more of your time, I know you’ve got to play soon. So I just have one more question. I always hate to ask bands which bands they feel have influenced their music the most so I’m not going to do that. But what I do want to know is what albums have you been listening to lately?

Rocketboys: Oh man… that’s tough. Lately it’s mostly been a bunch of our rough mixes! Justin Wiseman: I actually just bought my wife this album by a band called First Aid Kit. I think they’re from Sweden or something, but I’ve been really into it. Brandon Kinder: I have to say that band Felicia, who’s a big buzz band right now, from the other night at the moody theater was really good! Also, Vana Prasta was awesome live. Josh Campbell: I honestly have no idea what I’ve been listening to… pretty much just comedy radio!

Hahaha! Well thank you so much for taking the time to talk to me!

The Rocketboys: Absolutely! It was our pleasure. I’m glad you’re going to stick around for the show!

PredictablyMe Has Written 21 Articles For Us!

I’m just one of the many DuPrees out there. Most people in my family do really interesting things like making knives, guitars, music and origami birds… I have a blog and an eight to five desk job. I love writing and since said desk job allows me to listen to a lot of music I’d say if you’re any good at math you’d know that a love of music + a love of writing = a love of music review blogs. So bada-bing bada-bang, here I am.

I also, from time to time, go by The Iron Fist… or PredictablyMe.

Did you know PredictablyMe has a website? Go see what you're missing…
Blame it on: Madison Dupree on March 20, 2012.