The Shins- Port Of Morrow

Five years after the release of Wincing The Night Away and the ‘departure’ of Dave Hernandez, Jesse Sandoval, and Marty Crandall, The Shins (or rather, James Mercer) have released their long awaited fourth album, Port Of Morrow. Many have described the album as being more polished than the bands’ previous efforts. I suppose I’d have to agree, but it doesn’t matter how much you polish it, a boring album is a boring album.

The first four tracks are solid. And in a world where people actually pay attention to EPs Mercer could have released Port Of Morrow as one; and he would have been sitting pretty. But most people don’t notice EPs the way most people don’t notice short stories (…or books in general for that matter) and so we have the full album of Port Of Morrow. The Rifle’s Spiral has everything we’d want from a Shins song. The beat is up tempo and bouncy (all hail Joe Plummer from Modest Mouse) and the chord progressions are powerful. Mercer’s voice rings and the cute robotic melodies will hook you. Simple Song is similar. The track begins a bit more laid back but Mercer’s vocals are absolutely gorgeous and as always the song builds and crescendos beautifully. Bait and Switch hits hard with an almost Smiths style (and early The Bends style Radiohead) guitar mixed with Hawaiian rhythms. The song’s introduction, bridge, and outro are all very clever. 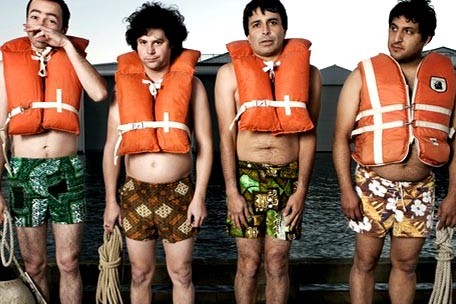 But after that the album kind of puckers out. September, regardless of how pretty Mercer’s voice is, doesn’t match the acoustic triumph of The Past and Pending. And No Way Down just sounds like something you’d hear on Clear Channel. Fall of 82 is nice, but it comes up lacking compared to Of Montreal, its obvious inspiration.

For A Fool is much stronger in comparison. The guitar melody and the layering of the song give the track a lot of depth. And the chorus is just way too pretty not to like. But this is the only song after track four that’s interesting. Once again I think this could have been a very intriguing EP. But in a full LP form it doesn’t carry. That being said I’ve had Bait and Switch stuck in my head for days now.

Did you know tbrowne has a website? Go see what you're missing…
Blame it on: Taylor Browne on March 23, 2012.