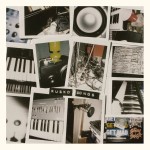 Songs begins with a sample of two reggae artists talking about creativity and innovation. One of them explains that when it comes to music you have to experiment.  To push the boundaries of the style in which you work and to be true to your heart are both essential parts of creating music. That Rusko chose to start his second full-length with this quote is either a coincidence or an indication that this guy is somewhat self-aware of his mark on the landscape of electronic music. Two things the British producer does are make music that comes from the heart and play around with the dubstep form.

“Somebody to Love”, the previously released single and album opener finds Rusko (real name Christopher Mercer) in similar territory as 2010’s O.M.G.! The song features the trademark wobble bass and front-and-center female vocals that carried close to half of the producer’s first album. The other half of O.M.G.! consisted of the type of dubbed-out reggae and club-ready bangers found on Rusko’s early mixtapes. Those dancehall inspired vibes are found on his new album in the form of “Love No More” and “Mek More Green”.

One of the more interesting elements of Rusko’s transition from releasing dubplates to albums has been how much he employs female vocals at the forefront of his tracks. At a time when many producers were using heavily manipulated vocals that were either pitched to sound otherworldly or drenched in reverb and mixed into the background, Rusko released the hugely popular single “Hold On” with Amber Coffman taking center stage. Mercer builds on that sound for tracks like “Pressure”, “Thunder”, and the aforementioned “Somebody to Love”. But Rusko is not one to rehash his style over and over without changing it up. The vocalist on “Asda Car Park” (which I mistook for Coffman for about a half a second) carries the intro bars of the track before an aggressive wobble bass drops and the vocals are gone. “Pressure” also uses vocals in an O.M.G.! kind of way for its first half and then chops the sample up after a dramatic, trance-style breakdown.

My first impression of “Dirty Sexy” was that it should have been written for Rihanna. Lyrically it’s a cheaply woven pastiche of clichés, but it’s still enjoyable. The instrumentals feature the du jour wobble bass and Nintendo arpeggio flourishes that have become Rusko’s signature.

There’s a sound that pops up here and there on Songs that seems to draw equally from 90s breakbeat, two-step, trance, and European piano house (see: “Opium” and “Whistle Crew”). On “Thunder” Rusko builds on these influences to achieve a triumphant, club anthem. He brings back the syncopated rave synth from the bridge in “Opium” but swathes it in huge, swooshy pads and Coffman-esque vocal samples to move the song through a series of buildups and breakdowns. When the vocalist sings “I’m putting out that vibe” it almost seems as if Rusko’s making a nod toward those successful moments on O.M.G.!

The album’s closer finds Mercer moving in a new direction entirely. “M357”, one of my favorite tracks on the album, is a moody piece featuring spare, pitched down vocal samples. The bass synth, understated by Rusko standards, is accompanied by delay laden piano twinklings. To go out on a bit of a limb, it sounds like Rusko’s take on the Burial aesthetic. Rusko is adept at setting a mood, whether it be playful, anthemic, or in this case somber, which is perhaps an effect of his mastery in building live sets.

I had the opportunity to see Rusko at Denver’s Ogden Theater when he was touring for O.M.G.! and it was one of the best concert-going experiences of my life. On stage, Mercer is a goofball, clowning around behind the decks and jumping along to most of the tracks. The six-shooter dance he did to a rapid-fire session of low frequency womp-womps will stick in my mind forever. He’s a skilled DJ and he frequently drops hits back-to-back with their remixes (which he introduces by joyously screaming “REMIX STYLEEEE!!!”). Mercer’s energy is infectious and he’s a true joy to spend a couple of hours with (along with two thousand other people in a sweaty venue). I mention all this because: 1) you should definitely check him out if you get the chance and 2) because both of his full lengths fail to reach the level of energy in his live show. The only thing that really compares to the mood and intensity are some of his earlier mixes, such as his installment of Mishka’s Keep Watch series, though a couple cuts from Songs come close. The best example is the aptly titled “Roll da Beats – Old School Edition” with its ominous wobble bass, laser gun blasts, and ricochet samples. There’s also what sounds like a potato chip crunch, which is fitting for a guy who sampled a duck quack on his contribution to Major Lazer’s Lazerproof mixtape.

Songs is an undoubtedly a good listen but it can be a little disappointing when Rusko, who can hold your attention for the hour-plus runtime of a mixtape, falls at all short of amazing. When you break the whole package down, it’s clear he can and has done better work. That’s no reason to be sad: according to his twitter, Rusko is already working on new material. What’s more to be happy about is he is currently on tour and, if playing Songs really loudly is any indication, this stuff is going to change lives when played on a huge club system.

Chris.Deaton Has Written 1 Articles For Us!

Chris is an admitted music nerd who spends his time listening to music, reading blogs, and making electronic music. He currently resides in sunny Austin, Texas and works in a little, grey cubicle. If you’re in Austin, hit Chris up to enjoy a beer or two.

Did you know Chris.Deaton has a website? Go see what you're missing…
Blame it on: Chris.Deaton on April 7, 2012.