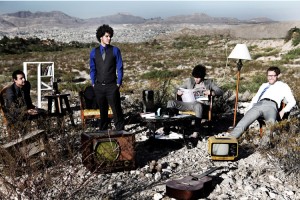 Last summer I had the privilege of seeing Zechs Marquise in their infancy. The show was expansive, proggy, and thought provoking. The crowd was interested, but to say blood and fists were pumping would be a stretch. This past Monday, Zech’s opened for At the Drive In and their new material has lifted their live show to a completely new height. To say it’s simply the new material would be insufficient. The band’s whole energy has found a new plane. Zechs played with a newfound confidence that amped the already bristling crowd. Marfred Rodriguez-Lopez (bass) mentioned toward the end of their set that the audience was most likely charged because of the first At the Drive In show in more than a decade, which was minutes away. However, this was a dose of misguided self criticism. Openers for big shows are never guaranteed an electric show, but the crowd got behind Zechs in a big way.

Most in attendance were not expecting much from a group many viewed to be simply the band with a bunch of Omar Rodriguez-Lopez’s (The Mars Volta, At the Drive, etc.) little brothers. Of those around me in the crowd, nearly every person commented on Zechs with delighted surprise. A couple of guys next to me kept saying, “What the fuck! This is amazing!”. Zechs’ jazzy groove-prog hooks grabbed the crowd, and their energy shook them until their legs were convinced that it was, in fact, okay to dance at a prog show.

Zech’s entire persona has evolved. This time last year, Marfred’s show presence was that of a down home musician, happy to be able to play in front of a pumped crowd. This time around, Zechs knows they deserve to kill it. Moreso, Zechs’ live performance was a pleasant, heavy-as-shit, hip-checking, surprise. Getting Paid certainly upped ZM’s game in terms of what they could do with a crowd, but that’s far from the whole story. In every aspect, Zech’s live show has been upped. Marcos and Matt on guitar are exponentially more potent, Marfred’s bass finds a more visceral groove, Marcel on drums allows for breath-stealing rhythmic tricks with mathy precision, and Rikardo’s synth finds a sick pocket to work within. Honestly, they sound like a completely new band. A band that knows they belong at the front of a crowd, being part of a new generation of prog rockers who’ve figured out how to get prog lovers to shake their ass to a bass line.

I was lucky enough to catch Zechs before their set at Red 7, in Austin TX. These are those words.

So Getting Paid dropped in September of 2011. It was received well, and I was wondering how everything has been post-Getting Paid?

Marfred: Yeah, the album’s been received well. We’re excited about that, and getting people out to shows. You know, circulating more.

Last time we sat down, you talked about having more of a beat, something people can move to. Have you noticed any difference in the energy of your live shows?

Marcos: When we played SXSW there were people that were recognizing songs. People were clapping during songs. It was really refreshing, experiencing that energy to that extent has been really cool.

Marcel: On some of the bigger shows it’s definitely been more like that, more of what we’ve been going for. Not so much the progressive rock or muso-vibe thing,

Marfred: People have been coming out more. Definitely much more output on the crowd’s behalf.

Have any of the changes altered the gear you use?

Marfred: Not so much. For the most part, we’ve been doing it the same way. I guess we use less pedals, but that’s more about what everyone is using. Though, everything is pretty much the same gear-wise.

Marfred: More touring, we have Europe coming next. We also have a few shows taking us out to California. We’re also going to Vegas. 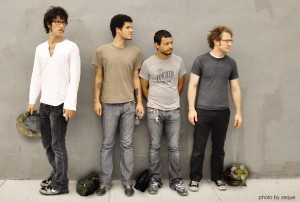 Have you guys played Vegas before?

Marfred: Yeah, we played two or three other shows there before. It’s kind of weird.

What’s the show vibe out there?

Marfred: The kids get into it and enjoy the music. You can’t really ask for more than that. It’s really cool to see that in a place you’ve only been to a handful of times before.

Now for the second obvious one. I have to ask an ATDI question. How’s this circus been?

Marcel: It’s really only began today and yesterday. People calling trying to get into the show.

Logistics haven’t been so bad?

Marcel: For us, it’s just playing another show. It’s mostly been the guest list stuff, that’s been the crazy thing.

Marcos: When I first heard about it we were like, what the fuck are you serious, of course.

Last time we sat down, you guys had talked about ATDI being a big part of growing up.

Marfred: Definitely. That’s an exciting factor in the whole thing, because we did grow up listening to it and going to the shows.

So this is pretty nostalgic?

Marfred: Hearing the songs for sure. Hanging out and talking, it definitely has that nostalgic feeling. It’s awesome that they could’ve done this without any band playing with them, or some other band. That they asked us, it’s cool.

Marcel: With the exception of people that they toured with, we were probably the people that saw them play the most. (Indicating Rikardo) This dude started started going to the shows when he was like 6. So yeah, we were always there outside listening to them practice. I didn’t have a snare stand or a kick drum, so my first drum set was set up next to Tony’s (Tony Hajjar of At the Drive In and Sparta) because he said I could borrow his stuff. It’s awesome for us, and for them they couldn’t find a more fitting group of people to play before them. It’s come full circle for us, we got into music because we were so proud of our brother and his friends for what they were doing.

What is it going to be like to go back to El Paso? El Paso’s music fest, Neon Desert, has all you guys, it seems like EP people are taking over the festival.

Matt: It was crazy.

Marcel: We’ve been rehearsing a shit load, but it’s different when you’re actually playing every night in front of people.

To Get Paid check out these videos:

Zack Has Written 6 Articles For Us!

Zack is the son of one, the brother of many, sister to some, and grandson of Lenny.