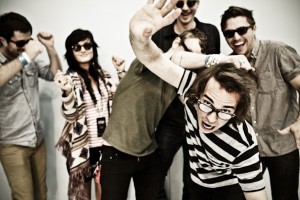 The Kopecky Family Band is no ordinary folk rock band you hear from Tennessee that’s for sure . But , they sure do bring the music to the shows.That’s not even the best part , after seeing them at Bonnarro Music Festival I would highly recomend seeing these guys live!  These cats will be at  Lollapalooza  in Chicago this August and other small venues on their tour this year.! Yes , they will be providing with brand new music from their recently debuted album that’s coming out this month. Unlike past songs “Birds”” and Howlin At The Moon” their new songs “Glow ” and “Animal” provide that dance around the bonfire kind of deal.

Probably wondering what do they sound like? Their music is a cross between Tom Petty meets new indie folk rock for 2012.Their lyrics possess love ,peace and happiness minus the hippieness!  Get this , none of these guys are related, starting a band out of Belmont University  in Nashville of 2007 . Fast forward a few years and their still playing music. One of their new song “She’s the One” is my favorite on their upcoming album ,well for one its really relaxing laid back song talking about love and finding that one girl(or guy). Their song “Animal” provides the soft old school blues feel to your life.

What if you can’t make it to Chicago? Don’t worry these guys are on tour right now! Giving not only the old songs from the Disaster album, but their brand new music from the upcoming album. Their musical sound and lyrics  are for everyone. Check out their music now via youtube or you could go to their website!

Did you know indiesoulchild has a website? Go see what you're missing…
Blame it on: Alyssa Ollivierre on April 12, 2012.