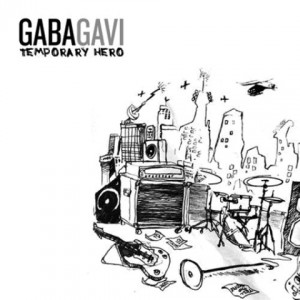 Temporary Hero is the first of a two part release from Louisville Kentucky’s Gaba Gavi. Gavi presents a collection of his latest works: a six song EP produced and mixed in a wholesome and straight forward style. Simple but eloquent melodies are blended with clean and punchy guitars, and complimented by a tastefully played rhythm section which supports overall an excellent use of Gavi’s vocals and vocal harmonies throughout.

The song structures are cleverly formulated meeting the criteria and more than fitting for the radio waves demonstrating a great quality and collaborative effort between the production and performances—it works. Tracks “Control” and “Pressure” are prime examples; they are well-written songs with great “rock and roll” hooks and capture a natural tempo sharing the style and character of Elvis Costello (among others.)

Temporary Hero has a flow; a “music box” (of sorts) which generates an even continuity of mainstream rock songs that glow with Gavi’s charm and musical integrity. “Raining on Broadway” another prominent track stands on its own reciprocating a good nature and emotion as favorites and rock ballads evoked in the days of recording artists such as Peter Frampton. Gavi’s soft-spoken yet direct approach is perfectly restrained exploding appropriately in all the right places resurrecting the “groovy” British pop sound back from the dead making this collection more than a “Temporary” but rather a “Permanent” Hero.

TheMood Has Written 11 Articles For Us!

Currently Arthur is a freelance music critic and writer; he has written a book, “Tribute: The Dark Side of The Mood” which exposes the biggest act of music piracy in history, exposing insider information about the theft of Pink Floyd committed by a Kurzweil employee/professor from Berklee College of Music.

Did you know TheMood has a website? Go see what you're missing…
Blame it on: Arthur Orfanos on April 12, 2012.