Following up their debut album “Conditions”  Temper Trap is releasing  their new sophomore album  on May 18th , with 12 brand new tracks. These Australian dudes have provided a new 80’s stadium arcade beat mixed with a  90’s U2’s power ballad feeling to their music .  Don’t worry though , “Trembling Hands”  gives you the old feel of Temper Trap’s past album. In “London Calling” you can tell their sounds are developing more broad than before. With any band trying  not to repeat the same music on each album,Temper Trap has managed to keep their sound and mold it to a higher degree for a new album. 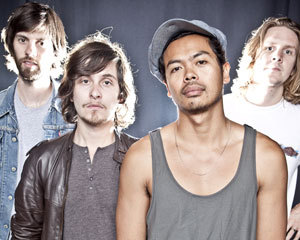 Their song ” Rabbit Hole ” is by far my favorite , it does feel like you escaped to the rabbit hole with the melodic background flows of the guitar riffs.  “Where do we go from here” contains those bittersweet lyrics that you been searching for to get over a ex.  Keeping things lively and hopeful is their song “Dreams.”

Dig their music ? Great news ,Temper Trap will be on tour to help promote  their new album in North America.  Not just playing in Lollapalooza and Bonnarro Music Festivals , but smaller venues like the House of Blues in Dallas Texas. Ticket prices average from thirty -two dollars to forty-two dollars for the venues and much higher for the festivals.

Keep in mind if you want to hear a good album for the year ,this is it.   Check it out when it comes out next week!