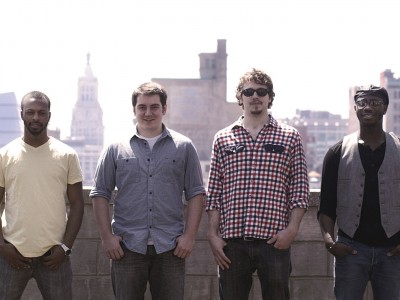 Tauk  a  groovy funky feel good band from Long Island ,New York has come to jam out  in Hangout Music Festival . I stopped them for an interview before they headed to Montgomery,Alabama on their summer long tour . Download their music free at  http://www.taukband.com/ Or Catch them at Summer Camp Music Festival or Bonnarro Music Festival this summer!

NewMusicMonkey : How did the band form?

AC: We all meet in high school.Been together for a while now. Since January we’ve had Issac on the drums.

NewMusicMonkey: Has there been any bands that has influenced your music ?

AC: Absolutely , we’re a pretty collective in our taste. We all come from different backgrounds and musical backgrounds. Personally myself ,I grew up on reggae,hip hop and r&b. Some of the guys listen to  classic rock and also some gospel music as well.We differently bring a lot to the table from terms of learning from each other.  Try and be creative on making the band .Be  aware , because theirs so much out there.

NewMusicMonkey: If you guys could collaborative with anyone alive or dead , who would it be and why?

AC: There’s so many out there . Right now I would say like Robert Glaser . His trio is  primarily instrumental ,but he  contributes vocals into his song.  He works with a lot of different vocalists.Even though their identity is instrumental they aren’t opposed to working with vocalists . His latest record, I really like look at and respect, you know for what he brings to the table. That’s one of my favorite artists.

NewMusicMonkey: Does your family support your band’s music ?

AC: Oh yeah,absolutely! Family is everything. We need everybody . I wouldn’t say my mom, or my parents are exactly excited about being on the road . Like any mom or any dad would want for their kids , but at the same time they support our musical endeavors. We’re really happy and blessed  that we have such a strong support system

NewMusicMonkey: What’s the craziest thing a fan has done that you have seen?

AC: That’s kosher to tell you. A couple of fans have come up to us after a show , a Halloween show  and we’re dressed up all in wigs and what not . Didn’t recognize them, but definitely but on a  funny show.

NewMusicMonkey: Where do you see your band going in five years musically?

AC : We would love to go touring and explore the live music scene. Obviously play the Hangout and coming up Summer Camp  and  Festivals. We want to be apart of the live music culture. Enjoy the time of being on stage, to share our music to the audience and the listener. Which makes our part the most enjoyable.Whatever’s gonna keep us on the road,keep touring ,keeping putting out good music. Good music and a good product, that’s what we wanna do and stay on the road.

NewMusicMonkey : Who are you most excited to see at Hangout Festival?

AC: Ah,pretty amped to see Jack White haven’t seen him before. excited to see Wilco and those guys . And Alabama Shakes they  were cool ,pretty great. Their was a lot of cool surprises.

NewMusicMonkey :Is there any artists that you never heard of that you liked their music after seeing them?

NewMusicMonkey : What would you guys be doing if you weren’t in a band right now?

AC:I sorta don’t have a plan B. But , I know personally myself I would love to teach ,I  would be  an amazing teacher . Maybe cliché ya know , but the thing is some of the best life lessons I learned have been learning to communicate through music. It’s a beautiful thing about experience. Issac on drums he teaches now . Charlie our bass player he just learned how to make basses . We still trying to be in the music scene, but we probably be teachers or craftsman.