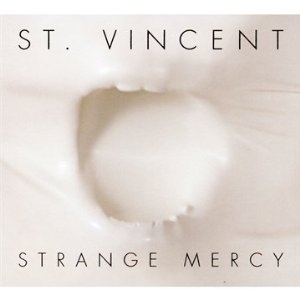 Afternoon,” which sucks. The rest of the disc does precious little to improve itself in the following 55 minutes of crap disguised as music. The aforementioned “Chloe in the Afternoon,”  is the start of a tedious, droning audio landscape, where the only highlights are the quiet moments in between tracks. It sounds as though the musicians weren’t listening to the other parts it was being recorded.  But alas, St. Vincent is but one person at the helm. Annie Erin Clark does everything, so she can ultimately be held responsible for this mess.

The song “Cheerleader” drones on and on about not wanting to be one. This begs the question why does the singer, Annie Erin Clark, choose to caterwaul at length about what she doesn’t want to be, instead of simply quitting the squad and joining the chess team or Future Farmers of America?

The entire CD is a synth propelled mess. Two or three keyboards burble back and forth, sometimes reminiscent of Tori Amos post-“Cornflake Girl” melodies. The kind of sonic freak-out she realized she could now get away with, now that she’d established a dedicated fan base who would indulge her experimental tediousness.

St. Vincent, wallers for so long in pretentious monotony it reminds me of the term, “European Luxury.”  Translation; cramped, overpriced, available in only two colors, and it won’t work in the rain. St. Vincent may feel sophisticated and arty, but it’s snobby Euro-trash indulgence, that translates into pure crap in any language on any continent.