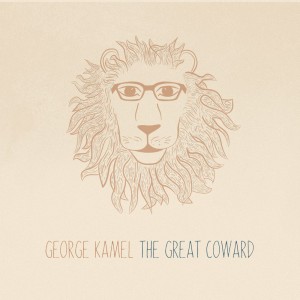 George Kamel  a singer/songwriter indie folk-rocker from Boston, MA has recently managed to fund his kickstarter project for his debut album coming out June 12th entitled the Great Coward.  Don’t let the Bon Iver  and Avett Brothers mix fool you, Kamel does bring his spin on music very warm heartily.  Opening up the album is the song “Hold On” which beautifully harmonzies both vocals, bittersweet lyrics and instruments . Next song playing “Used to Know” lyrics reminisce on  finding that way back to his lover’s heart that he used to know. “Found my way “comes on next and not only do you want to get up ,start clapping ,tap your shoes,  but also grab a dance partner while you’re at it! The song “Mockingbird” which holds the best melody on the album is the song you must hear!

Junebug my personal favorite song on the album incorporates a good soft folk tone with groovy sexy piano keys in the background.  The lyrics express his broad love for his lover”My love for you is bigger than the biggest mountain  that you”ll climb ,my love is true , my love for you is deeper than the deepest valley that  you’ll find ” . Guitars strung heavy in “I wanna live ” ,  with a nice fade in the end but ,who doesn’t want to live?  The album slows down as the song “The Wind” comes on and the suspense in the drums is amazing ,as the lyrics clash to the guitar playing singing ”with the wind ” . “Shadow Puppets” comes on, as a banjo jump starts the song, then slowly comes in piano keys, no there isn’t vocals at all. It’s not needed for a nice laid back instrumental.  “Home ( I am)” ends the album right with a magical opening taking you somewhere else. Floating on heavens clouds ,I like to describe it with sweet strums on the guitar solo ,as he ends the song saying ” and i am home “.

Nine tracks of some good music awaits you! Here’s a link to his preview of his album on kickstarter. http://www.kickstarter.com/projects/gkamel/george-kamel-the-great-coward-full-length-debut Don’t forget the album comes out June 12th!

Did you know indiesoulchild has a website? Go see what you're missing…
Blame it on: Alyssa Ollivierre on May 26, 2012.