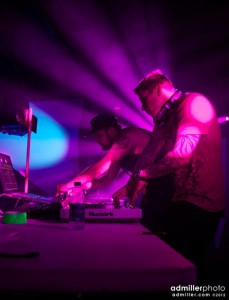 Unlike any other electronic dance music movement, Groov Fellas Movement has come to take over, one city at a time. Bringing new opportunities to emerging artists, with a collective range of Dj’s, producers and MCs. Last Saturday night at the local Malibu Lounge the Groov Fellas brought the house down one beat at a time. What many people fail to realize is that it isn’t about the crowd size you bring in, it’s the ability to bring in one person on that dance floor to get things rocking. Before the night began I talked to the main squeezes of GFM DJ BassBully & DJ 13 Ruble.
New Music Monkey: How did Groov Fellas Movement start?
DJ BassBully: Groov Fellas Movement started based on the EDM (Electronic Dance Music) scene. It’s really hard to get gigs in Pensacola; the community is very small. I had a weekly at Club Getaway, and then it took me a long time to get any gigs. So once I got a gig, I started trying to promote local talent. I started reaching out to people, saying ” Hey you’re into electronic music or hip hop or mc, or whatever, contact me we’ll get together, we’ll mesh up try to make a new style.” It’s just really grown since then. It was originally Groov Fellas but once it started to become more, we made it a movement. In the music industry its cut-throat, you have someone that will shake your hand now, and will stab you in the back later. They don’t want to give you any slot time; they want to book you for free.
DJ 13 Ruble: Not just musicians but to emerging talent, whether its videographers, photographers, artists, or producers. One of the biggest events we did was The Naughty & Nice Party at Lotus, where we were club residents.  We brought this kid Mike out, he’s a tattoo artist, he did my GFM tattoo. We had him do a live canvas, like when we were playing our show; we auctioned it off for this girls’ house that burnt down trying to help her family out of the house.
DJ Bassbully: Now, he’s doing M’s work too, and has gotten into painting, not just tattoos.
DJ 13 Ruble: For instance, we brought in this girl.  Photography was a hobby for her and we brought her into Lotus once, we really liked the pictures that she took. Got her over to the manager of the club and she became the club photographer. Dan Hillsman ,the videographer, has actually quit his former job; he was actually doing video graphing professionally.

New Music Monkey: Where did the name GFM come from?
DJ 13 Ruble:  We mesh a lot differently than a lot of people. A lot of people do when they have multiple DJ’s.They get a 45 minute to an hour slot. That’s cool with us too, but in the same sentence, we can also play all night long. You can come in drop a couple of tracks at 9 o’clock; if there is anyone here, instead of playing an hour set, you can come in back on your decks at midnight and two o’clock when there’s a bigger crowd you really get that exposure. Having been deejaying as long as I have, I remember I was only getting opening slots. It sucked playing to a room with nobody in it. All the new people we try to bring in, I don’t want them to having to go through that experience, because honestly it’s miserable. For us to play a little bit in the beginning, then someone else will come in, so everybody gets to play throughout the night. That’s what we’re trying to do, feature local talent. Trying to take the local talent, stick them in the beginning of our show just to fill out the time, until someone else can get on. We want everyone to get the opportunity to get thrown in the crowd, to get in front of people to really show off their skills.
DJ BassBully: It fills up time, but they get better at what they do. Also the thing is, a lot of people in town think this is a competition, that’s a big statement of ours, we are not competition, we want to work together. We’re not trying to take anything from anyone. We’re here to help build this community, make it more than what it really is, and to expose talent.

New Music Monkey: What makes your organization different from others?
DJ BassBully: Basically what the movement is, is bringing people together. This is un-explainable. Basically, it’s a reach out to have a good time, dance safe and really exposing new talent. We’re multi-genre, not gonna say all dj’s but one dj might come in and play strictly hip hop, then you might have one dj come in and play strictly reggae. It’s not one specific genre. We do multiple genres. Got a packed-out house and we’re playing dub step and nobody is feeling it, it isn’t anything for us to read the crowd, I know what they want and throw that in there.

New Music Monkey: For all those people unfamiliar with you guys, where do you guys play venue-wise?
DJ BassBully: We get a lot of bookings, DJ 13 Ruble has played in D.C,Baltimore, Panama City, Destin, pretty much everywhere.  We were the resident DJ’s at Lotus Night Club downtown, we did the EDM weekly at Cabanas and Getaway. We also did the paint parties as well. We come here at the Malibu Lounge because the owner is a friend of ours. Also, we’ve played at Live Club.
DJ 13 Ruble: Both of us will play at house parties.
DJBassbully: We’ll play at a boat, I don’t care. We’ll play whereever people listen to music and we’ll play when people don’t listen to music.

New Music Monkey  Reference wise, small or large venues, and why?
DJ Bassbully: We prefer people!
DJ 13 Ruble: I don’t care where we play it doesn’t matter, it’s really about the atmosphere of what’s going on, bringing everybody collectively together. Getting everybody to share an experience through sharing music. I would absolutely prefer to play at huge clubs in front of a thousand people, but at the same time we can have a small show with four or five people on the dance floor but at the same time it’s just as fulfilling.

New Music Monkey: What’s been the biggest challenge so far?
DJ BassBully:: Finances, money ,money ,money!  We do a lot of stuff for very cheap.
DJ 13 Ruble: Tonight we playing, we asked Alfred Do you guys want to throw him a birthday party? We told him to buy the biggest bottle of Jaeger you guys can find. We’re not really in it for the money; we all wanna be on a level to sustain ourselves doing what we love. I don’t care if it’s just a straight by, if I can live off playing music, my mission is complete

New Music Monkey: Explain to me the best part of the job?
DJ3 Ruble: Watching people react to what you’re doing. Being able to get a group of people that don’t know each other to feel that same energy on the dance floor, the vibrations of the music, Number 1, not having to play the wobble.

New Music Monkey: Is there any DJ/producer you would like to collaborate with GFM?
DJ BassBully: We want to collaborate with anyone, small, big, it doesn’t matter.  Anyone that’s into music and that has a passion for it and has a good personality and a good vibe; you’re pretty welcome in our scene.
DJ 13 Ruble: I would give my left testicle to collaborate with DJ Hype.
New Music Monkey:  Any underground artists you would like the public to hear about?
DJ 13 Ruble: There’s an awesome band in town called Joint Custody.  They don’t play electronic music.
DJ Bassbully: They carry energy in an aura that is lovely.  They give you that feel like when you listen to Bob Marley and smoke one this big.
DJ 13 Ruble:  Rock,funk,,hip hop. It’s a mix.   I can’t explain it.
New Music Monkey:  Five years from now, what do you hope to accomplish?
DJ Bassbully: We want to be signed.
DJ 13 Ruble: Different city every night

For the latest whereabouts on where the Groov Fellas Movement will be playing check their facebook live feed.https://www.facebook.com/pages/Groov-Fellas-Movement-GFM/253429948064206

Did you know indiesoulchild has a website? Go see what you're missing…
Blame it on: Alyssa Ollivierre on August 28, 2012.