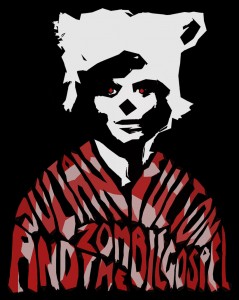 ~Last weekend , I had the pleasure of interviewing musician  Julian Fulton . Coming across his music one day surfing the internet , I encountered something new and fresh . His music blends not only a world of soul in your ears , but a warm place in your heart. Coming from New Jersey ,  Julian Fulton just like any artist wants be heard and played.

Q.Tell me how you got into music?

Julian Fulton: I got into music ,when I was twelve or thirteen around when I hit puberty. I was listening to terrible music like everyone does at the age , but then I started listening to my dad’s records . He happened to be a musician, which happen to influence me . I started taking guitar lessons.

Q.Do you write your own songs & what influences them?

Julian Fulton :Yeah , I write all the music for the band. Just the same stuff as anyone else , you just want to write anything , could be a certain thing that happens , or a person that you knew , or could be nothing at all.I don’t have a set way of writing songs.

Q.Dead or alive who would you love to collaborate with?

Julian Fulton:I would love to be the fifth number of The Beatles. If I would collaborate with someone it would be George Martin their producer.

QGrowing up ,what music artists were on your playlist?

Julian Fulton:When I was younger it was more classic rock , a lot of The Who , The Beatles, The Rolling Stones. As I am getting older I am on the hunt for new music.

Q.Do you think networking& social media has made promoting your music easier or harder & why?

Julian Fulton:Honestly both. In a way it’s never been easier to get yourself out there. But , because of that there’s some much more competition out there. It’s hard to stand out in a sea of people who are all in social media doing different things. Yet  , at the same time its better than having no way of getting yourself out there. I would say that the positive out ways the negative.

Q.What did you do as a job before this?

Julian Fulton:I was an umpire when I was younger. Also a cashier at a supermarket.  A bunch of odd jobs like mowing the lawn.

Q.Hearing a couple of tracks, how would you describe it to someone who hasn’t heard it before?

Julian Fulton:I know every artists says oh I don’t sound like anyone out there. But , I try to go out my way not to write the same songs twice. Its fun rock & roll and its good to dance to.

Q.At the end of the day would you rather be recognized as an indie artist or mainstream?

Julian Fulton:I would love to have that type of success, obviously you would have way more influences . Thus a lot more people hearing your music. . And reaching a lot more money too. More people would hear your music because you’re a big band .I much rather be an indie artist, if I were to be mainstream I would sacrifice the integrity of my music. I would have to calm it down or make it more pop and commercial. It would be great to be mainstream ,but I rather be indie and make the music  I want to make than making the music someone else wants you to make.

Q.What are your goals in the upcoming year?

Julian Fulton:I would like to set out on a three-week – one month tour. Travel somewhere I haven’t gone. Also find more permanent memebers for my band. I always had a really big band a lot of people coming in and out. Just a set group of people to hit the road with.

Did you know indiesoulchild has a website? Go see what you're missing…
Blame it on: Alyssa Ollivierre on September 4, 2012.