Sunday School brings back some pretty boring memories. Sitting in a room, organized to resemble a small quaint study center. Quiet, and trying to stay awake, I hear lessons on the basics of Jesus’ teachings and how we should emulate them. Those thoughts have been burned in some dark dull section of my mind. Tree’s latest mixtape, Sunday School, is anything but boring, and has little to do with the life of Jesus, and more with the aspects of man.

On the outside, Tree’s spiritual yet forceful attitude towards his music is something I have not seen anyone in recent memory do. His production is filled with hard bass lines choking soulful, organically layered instruments and samples. Opposite his production are his vocals. Seamlessly switching from rasp filled, choir like, crooning to sharp, and aggressive rap patterns – at some points screaming at you – giving you an ambiance of chaos and discord throughout the mixtape. Inside this anarchy are stories detailing the inner workings of not only an impoverished area in Chicago, but on the views, actions and most of all fears people have in this world.

Although it may take some time to truly appreciate, Tree’s lyrical style is something to behold. Combining the aggressive, rough tones of David Banner, with the loud, deranged accent adopted by Danny Brown is the best description I could give on his unique sound.  Fittingly, Tree for the most part sounds like a preacher at an evangelical megachurch. Interjecting hums, and bellows throughout his “sermons”, Tree’s pulpit delivery is unique enough that when compared to other artists featured on the mixtape – possibly apart from Chance The Rapper – they all seem so… normal. Listening to it further you begin to see the brilliance in his style. Because of the force his voice has and the flexibility of his lyrical approach, his words hold a lot more weight. One of the best examples of this is on Church. The canvas he crafts with his production can be looked at as a slow mourning. Samples distorted and chopped so much they mutate into incoherent moans in the background of pounding 808s and bass patterns; it leaves a sense of doom and failure throughout one of the best songs on the mixtape. Tree sternly weaves in and out of the track leaving weight on every bar. “Couple my homies they end up dead/…Should’a did what mama said”. A line, not necessarily noteworthy on its own, but the delivery that it was presented in is so organic, so unsubtle that it hits you harder than you expected. 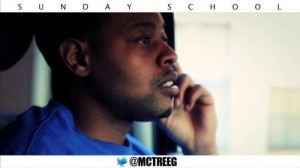 Tree’s production is what propels his project to truly stand out, and is just as unique as his voice in its delivery. While the popular sound in Chicago is the Drill scene, which is known for its minimalist use of production, and car trembling bass sequences, Tree diverts from this formula. Although the massive bass patterns are still there it’s alongside some of the most interestingly skewed sampling I’ve heard in a while. When in high school I could remember the love I had for soul beats – beats consisting of older R&B/Soul singers sampled and placed over a track the producer made themselves (for examples look up Diplomats and Heatmakers) – although popular then it had been over saturated with producers jumping on the bandwagon. Tree, although adopting this formula, brings a personal style to it.

During the recording process of Sunday School Tree stayed in Atlanta, and that oozes through his production. The southern feel of an old UGK, Pastor Troy, or Z-Ro album is evident in every track on the mixtape. That’s not to say that Chicago has left him, or that it’s a southern project. The way Tree uses samples and his attention to making them the star of his songs takes us back to the Kanye West influenced Chicago of the early 2000s. What sets him apart is that instead of grabbing a particular sample and dropping it on the track, Tree takes samples, chops them up, and pieces them together, layering the samples on top of each other so that they sound slightly off. Putting this into his beat, along with his pulsing drum patters makes for a unique, but oddly familiar product.

There are two sides to Tree’s mixtape made glaringly real in the track Sunday School. “Pops use to make us fight them niggas back/Moma use to make us all go to church”. The two aspects are something every person is guilty of. One side is the “Pops” attitude which gives in to the wants desires and needs of man. The bravado to show your superiority. The insistence on stating the loyalty you have with your peers, and the joys you experience during your success are all aspects of the “Pops” mentality. But, there’s another life to this. The fears that come with your lifestyle. The thoughts of the people you may have left behind, the hopes that you will be forgiven for the mistakes you made, and even the truth about the value of the success that you boast about, all are revealed during the “Mama” aspect. These two values are what make Sunday School such an affirming mixtape. Tree develops something far more scatted, personal, and conflicting than similar projects with this type of subject matter. What comes to mind are Jay-Z’s American Gangster and Frank Ocean’s Channel Orange, both delve into the morose of society and the people that live in them, generating a world to house their subjects in. Tree diverts from this formula and instead centers everything on him. The good and the bad, the boasting and the loneliness, the love and the hate are all coming from him. His hopes, dreams, fears, and experiences are all plastered on this mixtape. That’s what makes Sunday School such a dope concept. Its school for people wanting to understand the environment he lives in, and who the artist Tree is.