The Return of 45 Grave

Vocalist Dinah Cancer is the sole original member of 45 Grave, and for this, 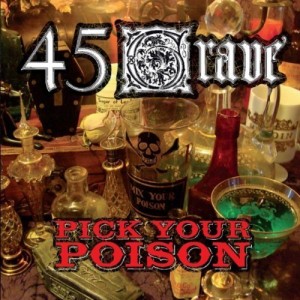 their first release in 27 years, she’s managed to put together a great line-up to do tribute to the bands legacy. One of the original Goth/death rock bands from back in the day, 45 Grave were at the fore front of the horror punk movement.

Opening with a 1-2 punch this band is here to remind everyone why they’re legends. Opening with the solid “Pick your Poison,” 45 Grave set the tone with a great track driven by a niggling guitar riff that could have been lifted from Alice Cooper’s Love it to Death. Followed immediately by the sucker punch subtlety of “Night of the Demons,” Everything seems to be as it should.

“Child of Fear” is the first major left turn on the disc. Slower, and more metal, it shows a different side to Dinah Caner’s songwriting. Same goes for “A Desert Dream.” A pensive instrumental track, with piano, of all things, reminds us this after all a band with some distance between then and now. 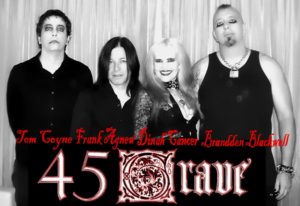 “Lucky 214 and” and “Highway 666” are the other stand-out tracks here, full of piss and vinegar. This may not be 45Grave exactly as you remember them, but there’s still plenty of life left in this undead ghoul.

Did you know Bertman has a website? Go see what you're missing…
Blame it on: Bertman on October 25, 2012.