The time of Year for Dead Chicks and Draft Beer

The core members of Cocoa’s Lazaras and Tampa’s Boney Fiend have been playing together since 1996, proving not all East Coast/West Coast rivalries 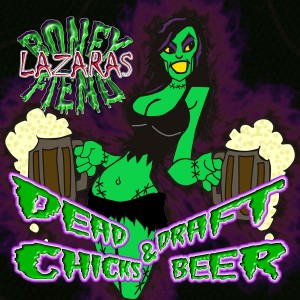 need be fatal and punctuated by gunfire. That this split CD should finally be released only makes sense.

Boney Fiend starts off strong with the in your face “Exit 13,” which has a memorable and infectious opening riff.

“Lemmy” affords the band a chance to wax poetic on one of Metals most enduring icons, warts, mutton chops and all. Cribbing lines and references from Motorheads extensive catalog, the lyrics are a bit of fun, to try and place each and every one.

But it’s with “Starship Enterprise” that BF throws down the geek gauntlet and declare themselves ready and willing to follow Captain Kirk anywhere he might lead them. This track shows not only the Fiends sense of humor but Jimmy Fiends guitar skills shine brightly here.

Throughout their tracks The Fiend manage to maintain a level of intensity a great many punk acts lose after having been at it for as long as they have.

Lazaras has always had a sense of humor, but there seems to be more of it on display than usual on this disc. Perhaps the “Odds & Sods” nature of the collection is what unleashed these songs which wouldn’t normally be on a full length Lazaras release.

They finally recorded long time live staple and fan favorite “Jackin’ My Way Across the USA,” which chronicles the boys making deposits at sperm banks across the country in order to keep the van filled with gas.

“Graveyard Girl” chronicles a romance with a girl recently unearthed for the night. “Broken, Bruised and Born to Lose,” shows off a slower more thoughtful side of the band than they are normally known for. With lyrics which could have been come from David Allen Coe’s best prison notebook, vocalist Chuck offers some thoughts on being kicked around repeatedly by life.

The songs on this split release complement one another in the same way both bands work well together live. There’s muscle and wit, razor sharp guitar work from both sides of the aisle, and the feeling everyone involved had a damn good time recording it.

Dead Chicks and Draft Beer for all!

Did you know Bertman has a website? Go see what you're missing…
Blame it on: Bertman on November 13, 2012.