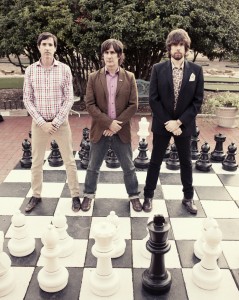 Much has been written, read, and recited as wisdom about the The Mountain Goats’ and John Darnielle’s musical style. Is it overtly personal? Yes. Exclusively biographical? No. Is every song either epic or humble? Sort of…? Suffice it to say, The Mountain Goats are concerned with lyrics before music, and multitudes of expression emanate from within. Darnielle leads with poetic narrative instead of arresting beats and timbre. He will not thrill you with a wall of sound, or pique your ears with intricate chords and time signatures. He will, however, use those tools to draw you into the expansive reaches of his imagination, and once immersed it’s hard to leave unchanged.

When I first started listening to The Mountain Goats it all seemed rather excessive and crude. Songs like ‘No Children,’ felt over-wrought and completely self-indulgent, and perhaps they are. As I listened more attentively, I saw their music and its principle author in a new light. Most bands of comparable popularity rely on theatrics over substance. Darnielle approaches composition from the opposite direction using music to frame emotional significance. The opening salvo from the latest record Trandcendental Youth, “Do every stupid thing that makes you feel alive” is nearly yelled over a pounding guitar rhythm, but gets balanced by the muted quivering chorus, “Just stay alive, just stay alive.” It would be misguided to dismiss all self-reflective music as inherently narcissistic. The world needs navel gazers.

If you look up anything about The Mountain Goats, you are sure to find The Decemberists recommended to you by the ever-helpful algorithms helping you determine your tastes. While it’s true the two songsmiths have some common affinities, their differences offer two compelling literary styles expressed in modern popular music. Colin Meloy writes, generally, in broad allegorical stokes from an outside perspective. Darnielle, by contrast, focuses on minute detail expounding in soliloquy on a life struggling for atonement. Meloy wishes he were Dostoyevsky and Darnielle is more akin to Joyce or Faulkner. The Decemberists are grander in narrative scope and instrumentation, while The Mountain Goats are more intimate and verbose.

Transcendental Youth doesn’t have an over-arching theme, but rather a recursive allusion to the title and the branches of its meaning. The feeling of being alive, of pushing your limits and ignoring the risks, of ‘rush[ing] up to the precipice and then slamm[ing] on the breaks’, creates the ephemeral justification to just stay alive. Songs on the album vacillate between the energetic like ‘Cry for Judas’ and the contemplative. ‘White Cedar’ brings together all the strongest features of Darnielle’s writing while gracefully illuminating the album’s central motif. From within a solemn reverie emboldened by a yearning piano Darnielle sings defiant and hopeful, “You can’t tell me what my spirit tells me isn’t true.”

That spirit carries through beautifully in concert. This was my first show at the new Emo’s on Red River, and though the place is little more than a repurposed warehouse, their sound system and engineers delivered Darnielle’s voice and message clearly. I’ve never been to a show with an audience so captivated and hanging on every word. The auteur quality of Darnielle’s work shone through, and despite the gravity of his subject matter he is an engaging and affable showman. It’s that sort of unassuming authenticity that wins people over. It makes the music and lyrics more compelling and relatable. Poignant details hit harder and the stories feel more urgent. The excruciating attention to detail and bedside journal nature of his writing gives fans the freedom and courage to explore their own reflexive contradictions. Though he runs the risk of solipsism and self-obsession, Darnielle doesn’t seem to care. He is not a celebrity by nature, but a soul possessed to create.

The Mountain Goats “This Year” from A Bruntel on Vimeo.

robert.crump Has Written 3 Articles For Us!